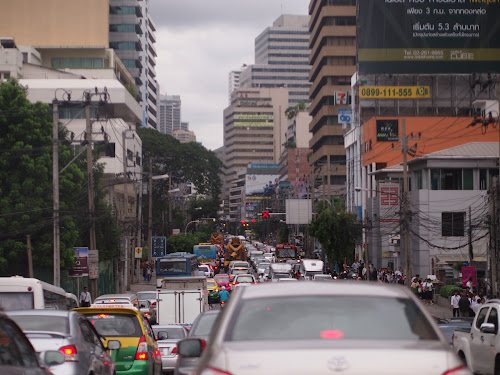 ASEAN Member Thailand Bangkok Traffic Jam
The Association of South East Asian Nations, otherwise known as ASEAN, is going through a significant amount of changes. Member countries are as follows: Thailand, Vietnam, Cambodia, Myanmar (Burma), Laos, Malaysia, Indonesia, Singapore, Philippines and Brunei. For the most part, they are moving towards an economic free trade zone akin to the European Union, but without the hangup of the single currency which has saddled Europe with some austerity programs and general discontent. One of the most interesting aspects of this trade zone is the integration of English into the backbone. English is the official language of ASEAN. It is described as the ASEAN Economic Community here:

The ASEAN Economic Community (AEC) shall be the goal of regional economic integration by 2015. AEC envisages the following key characteristics: (a) a single market and production base, (b) a highly competitive economic region, (c) a region of equitable economic development, and (d) a region fully integrated into the global economy.
The AEC areas of cooperation include human resources development and capacity building; recognition of professional qualifications; closer consultation on macroeconomic and financial policies; trade financing measures; enhanced infrastructure and communications connectivity; development of electronic transactions through e-ASEAN; integrating industries across the region to promote regional sourcing; and enhancing private sector involvement for the building of the AEC. In short, the AEC will transform ASEAN into a region with free movement of goods, services, investment, skilled labour, and freer flow of capital.
ASEAN Economic Community (AEC) Blueprint
The ASEAN Leaders adopted the ASEAN Economic Blueprint at the 13th ASEAN Summit on 20 November 2007 in Singapore to serve as a coherent master plan guiding the establishment of the ASEAN Economic Community 2015.
Please click here for the ASEAN Economic Community Blueprint

There are obvious logical reasons for the standard language for ASEAN being English. In today's economic universe, the common language is English. Because the USA has been a dominant economic power in the world since 1945, it is English that must be spoken. Not French or Russian or Chinese. At least, not for now. In fact, the Japanese businessmen often speak English anyways. With English becoming the common language of ASEAN, the higher educational institutions need to standardize language skills across the region in order to allow for better integration. The TOEFL exams and other English proficiency tests will become much more important for job security and job placement in the member states.
Thailand is moving in this direction. To get a job at a Starbucks, you need a certain score with the TOEFL. To get a job at a McD, you have to have a certain TOEFL score. Basically to get any job related to tourism, you need some sort of evidence in English proficiency.
ASEAN's Economic Community will allow for citizens of member nations to move around easily in terms of work permits. How the English proficiency tests will play in this is still being defined, but Thailand's increase in the use of testing scores is a good indicator. The proliferation of English focused tutoring programs and testing centers is growing rapidly, and of course this brings up the problem of the "native speaker" teacher. Hopefully, it will eliminate one of the biggest issues in SE Asia, the uneducated "native speaker" who gets hired just because they are Western. I've taught in classes in the USA in which I've failed students for grammar and other problems. Not to mention the disease of text language into the written language has degraded the English language in America. Unfortunately for various reasons, English has not been well integrated into Thailand's system. In fact, they can read and write, but they are horrible with speaking. The other problem is cultural. Thai students rarely challenge their teachers.
Problems. Thailand is actually one of the lowest in terms of English proficiency. According to University World News, only Malaysia is ranked anywhere near proficiency. Singapore's official language is English, which might explain how they seem to be such major players despite being one of the smallest in ASEAN. I am hoping that they not only get the English improved, but also the general knowledge of a global economy. Amazingly enough, I often have it easier in Vietnam as many speak a basic form of English.
Things are not entirely rosy in America either. With all the accreditation issues in America like the potential demise of City College of San Francisco, you may wonder how things fair in SE Asia's higher education systems. Well, it is hit and miss, which may make this entire Economic Community project also hit and miss. There are wide disparities between the countries in terms of rigor and staffing. The public colleges in Cambodia are not often well supported in terms of competitive salaries for professors. Vietnam's higher education system is largely a hybrid of more American style systems in the South, and more Soviet style specialization structures in the North. Highly specialized majors often create gaps in terms of handling globalized relationships. Thailand's system is not bad, but if you monitor how well the students understand general knowledge, world history and other essentials for globalized commerce, it is lacking. It was most evident when Chulalongkorn University had a major meltdown with a mural featuring Adolf Hitler as a hero. Chula, as they call it here, is considered the top tier university of the country, so this isn't the most positive publicity. Just informal talks with Thai students here show some problems. Many don't know anything about the Holocaust. Nothing. This shocked me.
Although English is important, the need for proper globalized levels of knowledge would be key for ASEAN. Nothing is clearly just local anymore. Everything has a globalized context. 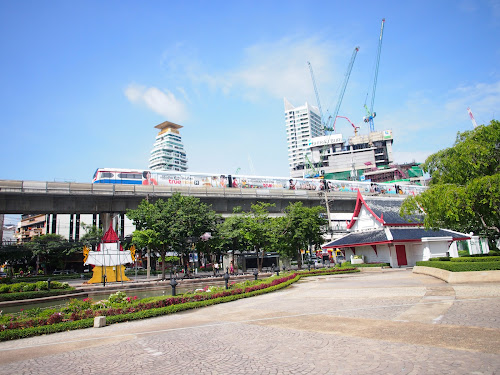 Coinciding with the construction boom in Thailand and other parts of SE Asia, there is a growing need for educational expansion as well. As the Economic block becomes more of a global player, the need for intellectual capital and resources grows. Singapore is the key lion in all of this, and it is a country that realized that education was the pathway towards national success. It is multicultural in its population, but English is the common language for all. Channel NewsAsia, the news station of Singapore, broadcasts in English, and it actually does news versus partisan BS. English is a part of it all, but a more globalized general education may be necessary for an ability to deal with a globalized economy with various cultural differences to navigate.
ASEAN has a bright future, but it has much to do to make things better in the educational arena. This is especially true in terms of general knowledge in a globalized environment.

Posted with Blogsy
Posted by Sensei Maruyama at 10:10 PM