iPhone Pano shot from balcony.   Not the best, but you get the picture.
When I was an undergrad, I actually studied a little bit about Marx.  One of the things that I remember is that he noted that the means of production governs the means of existence.  Essentially, your economic structure often influences how you conduct your life.  Now, after several years, I was actually really able to see how that change could be transparently clear.

In the Sapa region, the means of production is directly tied into a growing tourism industry.  The problem about this situation is that it has changed the very fabric of how people live in Sapa.  The hill tribe people were primarily subsistence farmers, but because of the tourism industry, they have modified their lives in order to maximize their ability to sell.  The first thing that will happen is that you will be immediately greeted by young women in indigo clothes trying to sell food, jewelry, linen, and other clothing items. 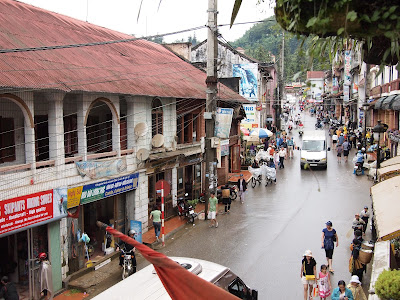 In this part of the region, I hardly encountered any Americans.  Most of the people I encountered were French or Australians.  Pretty much, in this part of the world, the Aussies are all over the place.  It is raining in this picture.
One of the things that the hill tribes have done is to use their traditions as a tourist attraction.  At the Cat Cat Village location, there is a small performance space for them to show their various dances. This is the entrance to it. 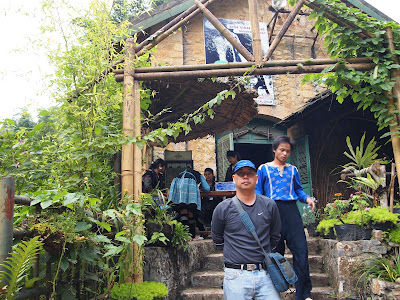 The performances were pretty nice.  The flag of Vietnam is displayed pretty prominently here.
Posted by Sensei Maruyama at 10:12 PM