Today, it is really darn hot. Went cruising around town at 10:00 AM, and it was over 90 degrees. Traffic is less intense than in Hanoi, but the traffic rules seem the same. "Get the Frack out of my way!" Honking is a constant in Vietnam. It almost seems like a form of conversation. You have a polite warning honk. Then you get the F-bomb honk. Then you get the desperation honk to go against traffic, but you need to go someplace across the street honk, so let me go honk. But what is this port city?
Hai Phong is about 100 km away from Hanoi. During the war, it was subject to heavy bombing by US Forces. This was largely due to it being a deep water port which allowed for imports of Soviet equipment. Pretty much after a few decades, things were rebuilt. This is the thing about Asia; it's been subject to major wars from World War II, Vietnam War, Korean War. All the countries that got decimated came back. Such is the will of humanity, especially in Asia.

As with most Vietnamese cities, it is a complex amalgam of Post-Soviet ideas coupled with unbridled Capitalism. But when you compare it with Thailand, there is a sense of order and cleanliness that emerges. Things shut down in Vietnam by Midnight. Basically it allows the city to be cleaner of the detetrius of human existence. Thailand on the other hand is a 24 hour world. Things sometimes get cleaned only on Mondays.

People hustle in Vietnam. Even on bicycles in traffic. This city has less of a tourist pattern. In Hanoi, you see them everywhere in the Old Quarter. In Hai Phong, not so much. But perhaps it is here where you see the truly local life. 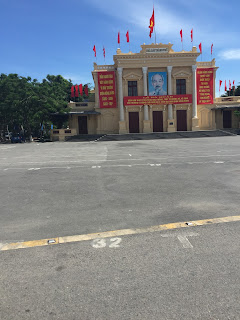 There are spaces here where you don't see anybody parked. The gaze of Uncle Ho is ever present in Vietnam. The Party still runs the show. It is sort of the same system as in China. In terms of this part of the world, two city states stand out. Hong Kong and Singapore. The potential. But still, the country has done well relative to the post Doi Moi (economic reforms) date of 1986.
Even now as I sweat my life away, there is a reason why people, especially chefs love this country. The food is largely locally sourced. There are no strip malls of corporate monotony giving the illusion of choice. In a span of 5 minutes, I spotted at least 6 different Pho Bo establishments, sometimes just on a curb.