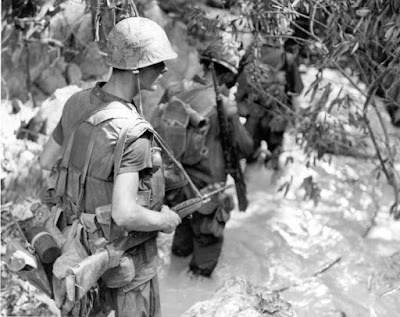 From Vietnam Center and Archive.
I'm going to Vietnam, Cambodia and Thailand within a span of 2 months. All of the airplane tickets are paid for. All of the housing in 2 countries are paid for. (I'm paying for Thailand, but that is my own personal project.) All the arrangements have been set before I am going to LAX. How you might ask? Well, it is because of a great grant being used by El Camino College, Long Beach City College and Bakersfield College as well as my lowly little El Camino Compton Educational Center. Basically a bunch of community college professors are being paid to go abroad and to develop curriculum. I would say, "I'm one lucky son of a female dog."
As of the year, 2010, I have been allowed to enroll in the US Department of Education's Fulbright Hayes Group Project Abroad. Now, you might be thinking, what the heck is that Fulbright term doing there? Well, to be precise, it isn't a traditional Fulbright. Fulbright scholarships are destined for those who can spend a lot of time overseas, and more importantly, it is governed by a different part of the US Government, specifically, the US State Department.  I'M NOT A FULBRIGHT SCHOLAR.  I'm a scholar traveler being paid to do so by the Federal Government.  Talk about a great stimulus package.  So, I'm a lowly professor/writer/traveler/NGO advisor who will be running around all of South East Asia documenting my findings.  The fact is that I enjoy this sort of stuff now.

Business.  According to the Federal Government, I must include a statement in some capacity so here goes:

Okay, now that I got that out of the way, of course this stuff isn't the opinion of the US Federal Government.  It's my mental excrement darn it.  I should get credit for my excrement, not the Feds.  So there.  Actually, if you want to find out more, go to the link.  I made the entire statement a link, so there is no way I get hammered for such an error.  Now, back to the entire background of travel to me.

Before the George W Bush era, I was a person who never liked airplanes, and the farthest I went was to San Francisco, and I drove.  Now I get on airplanes every year, alone, and plant myself in some location that I've never seen before.  You can only do this when you are single by the way.  No one else would tolerate a person disappearing for 2 months into the jungles of South East Asia.  They would think I went bamboo.  For more of an explanation about "going bamboo" go see this Anthony Bourdain special on Indonesia.

The purpose of a blog is to allow me to store and document my findings with this trip. Most of it will probably become a sort of travelogue. Basically, much of the content will evolve into a form of travel writing, but further academic meditations will develop afterwards. Whatever the outcome, I am going to monitor the sense of difference between the image of Asia and the complexities of America's perception of Asia.
For this project, I'm focusing on both Vietnam and Cambodia. The goal is to develop two separate modules based on specific use values and literary content. Because America is obsessed with the Vietnam War, I intend to focus on the war issue. With Cambodia, I am going to shy away from the Khmer Rouge/Killing Fields issue. What I am going to focus upon are modern NGOs (Non Governmental Organizations) trying to deal with human trafficking and other social issues. The Cambodian module will be the basis for service learning projects that could be developed for a number of nonprofits in the Los Angeles Basin.
Project Outline: Vietnam
For the purpose of my project, I have decided to review a variety of contemporary texts from Vietnam about the Vietnam War. Now for the Vietnamese, they term this war as the American War. In fact, it is a part of an entire laundry list of wars that Vietnam has been involved with. The bigger question to me is how the East and the West approach war, and the depiction of war in their cultural products.
Now there are a lot of resources on this topic. For example, there is a pretty good PBS Website called, Battlefield Vietnam. Out of Clemson University, there is a bibliography developed by Edwin E Moise. In addition, there are stories focusing on the effects of the war and the eventual migration of populations from war zones such as the PBS special, "Vietnam Passage: Journeys from War to Peace." PBS also has a dedicated website called Vietnam Online, which is a part of the American Experience series. There is also the Vietnam Center and Archive, which has extensive materials on the war, and various pics. There are website that focus on our obsessions like the Vietnam Era POW/MIA database from the Library of Congress. Obviously, there is also the Vietnam Veterans Memorial as well, which maintains a website. Much of the content however is USA centric. In other words, we don't have a clear profile. The purpose of this project is to create a more logical and holistic approach to the topic. It is more akin to Clint Eastwood's examination of Iwo Jima with his combination of Flags of Our Father and Letters from Iwo Jima.
Project Outline: Cambodia
Cambodia for the most part is one of the most ignored SE Asia countries outside of Laos. Both of these countries got messed up by the Vietnam War conflict, as the US bombed the living daylights out of these countries in various secret wars. In Long Beach, CA, we have one of the largest populations of Cambodians outside of Cambodia. In fact, I live right in the middle of what could be considered to be Little Cambodia.
Much of the images of Cambodia are connected to Pol Pot's Khmer Rouge period in which he almost wiped out the entire country with genocide and murder.
In terms of online resources for Cambodia, much of it is sourced from PBS. With the Frontline/World series, they have some episodes called Pol Pot's Shadow, October 2002. There is a website called Beauty and Darkness: Recent history of Cambodia. Out of Yale University, they have the Cambodian Genocide Projectambodian Government. Basically, the Killing Field's dominates the discourse when you invoke the term, Cambodia. However, I'm going to focus on the after effects--poverty and human trafficking.
Somaly Mam is a Cambodian woman who has gained some sort of notoriety because of her efforts to combat human trafficking. Much of this is directly connected to her personal experience of being a sex slave at a very young age. In fact, what I find fascinating about her is her ability to formulate and develop her NGO called AFESIP Cambodia despite what could be considered to be a horrible childhood. The US fundraising wing is called the SomalyRoad of Lost Innocence basically outlines her eventual enslavement in the sex trade.
Increasingly, there appears to be a spike in human trafficking. Websites and organizations are focusing on this aspect like Humantrafficking.org. This is a website run by the Academy for Educational Development. In addition, there are organizations in the Los Angeles Basin such as CAST that tries to work with the Los Angeles Police Department.
Projects: Thailand
I am in essence a person who always has something going on in the background. For years, I have been working on the Tsunami relief effort in Thailand. Lately, I've been trying to push for a transition of funds to build up a scholarship program with the Graduate School of Psychology at Assumption University. More of this later, but this isn't the focus of this blog.
Posted by Sensei Maruyama at 2:32 PM