Orientalism and the American Mind

A Speculative Post-Colonial Dissection
I'm actually fascinated in the cultural mechanisms that drive the discourses surrounding South East Asia.  There is this strange Hegelian Dialectic argument between the East and the West in general.  This sense of confusion could be seen in Lost in Translation, which is a film that documents the sense of disconnect between Bill Murray's character, Bob, and Japan.  For the most part, much of the discourse surrounding Vietnam, Cambodia, Thailand as well as Asia in general is tinged with Orientalism.  For many in the West, they are like Bob.


For Bob, Japan is a cipher.  The more he actually tries to understand Japan, the less he seems to understand.  In a sense, this discomfort perhaps will always exist.


Definitions and being Defined
Now, we have to get into definitions.  The Orient invokes descriptors like exotic, mysterious, complex.  Asian is less exotic and more connected with a map.  When you describe anything Asian, you have to qualify it with geographical locations.  The sign signifier aspect of the term particular gets complicated.  Oriental often can be used as a descriptor for a rug--Oriental Rugs, Oriental table.  Asian is more broad and neutral.  Asian rug just sounds to generic.  The two terms signify two different things.  Whether or not you can sense the tone of each word also gets complicated.  If you want to know, generally, don't call Asian American people Oriental.  It makes some feel like an ornament.

The main issues is that there is a tendency towards simplification.  The Orient/Asia becomes a simplified monolith that becomes the sign/signifier for an entire region.  The fact that the languages are diverse, and there is cultural diversity in Asia is not often inspected or challenged.  (A good parallel is the term Mexican.  Mexican is now a descriptor for anyone south of the border.  This includes all of Mexico, Central and South America.  It's inaccurate.  Never call a Guatemalan a Mexican.  That could be unhealthy for you.)  If you ask an average American, they may not be able to locate Vietnam on a map.  Many students can't identify the years of the American Civil War, let alone the Vietnam War years.  Many view things through the prism of generalities.  This is also the heart of Orientalism--simplifications and generalizations. 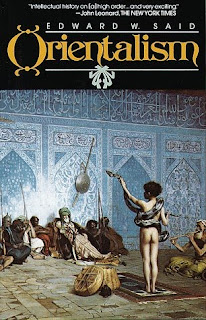 Orientalism, the post-colonial buzz term, was first defined by Edward Said in his book aptly titled, Orientalism,.  If you read it, it focuses mainly on the Middle East rather than Asia.  The history of the West's relationship with the East has always been convoluted with racial dynamics and just outright manufactured perceptions of Asians.  "East is East.  West is West.  And never the 2 shall meet."  Basically, it is a question of the other.
Orientalism and Wars
For much of the 1800s and the early 1900s, there has been this strange obsession with eugenics and Social Darwinism.   Some of this can be tied to wars.   Images of Chinese smoking opium often show up, but to be honest the traffickers were English.  The fact that there was a war against China by Britain for the right to keep on selling opium, says more about the West than about China.  Regardless, most Americans do not know of the Opium War in 1839.

Japan can be a starting point.  The Russo-Japanese War is an interesting historical event that ultimately messed up the initial Orientalism myth.  In the 1800s to early 1900s, much of China was being dissected by various colonial powers.  Practically every part of China was being taken over by Western powers, but Japan got into the mix in the 20th Century.  The Japanese for the most part were sort of dismissed, since they were Asian.  The Russians assumed they were weak because they were Orientals.  No Non-European power has ever defeated a European power.  This changed after the Japanese promptly sunk their entire Pacific navy and forced Russia to back off in China.  This strange sort of logic surrounding Asia seemed to persist even after the Russo-Japanese War and the collapse of Singapore during World War II.  That happens to be one of the greatest defeats in the history of the British Empire.  The British had a hard time processing this event.  Overall, there remains this mixed fear of Asians as a generality.  On one level, the Asian can be easily dominated.  On another level, the Asian is the ultimate warrior.  In many ways, it is a form of doublethink.


Generalized Perceptions
For Americans,  the perceptions of Asians are very narrow in American media.  Asian American males are not exactly as popular in popular culture as the exotic Asian and/or Asian American females.  Even if you are the hero, you are still sort of nerdish.  Just take a look at Heroes if you want any sort of example.  The question does arise in how does the West really perceive Asians.  I'm not even bothering the term, Oriental, since that seems sort of old as well.  It's like the difference between such terms as colored, negro and black.  All in all, there is a sense of confusion about Asians.  Some of it seems to mirror the perceptions of Walt Kowalski in Gran Torino.  The rituals seem to be different.  The cultural codes are different.  What is not properly defined is that we are talking about cultures and societies that may have existed long before the Mayflower even hit the rock in Plymouth because they ran out of beer.  (That's true by the way.)  So it isn't crazy to see old Walt sitting on his porch drinking a beer and scowling about them new neighbors.  Walt comes around to helping the young kid next door.  Eastwood is unique in that way.  He tries to show both sides as he did with the Flags of Our Fathers/Letters From Iwo Jima project.  But what of this overall concepts in Post-Colonial discourse?
Conclusions
Edward Said's text primarily focuses on the perceptions of the Arab world as a starting point.  In my opinion, Orientalism is a part of this concept of New Historicism or general Post-Colonial theory.  Everything must be interpreted within a context, with the prism of a society's system of ideas and mythologies.   Indeed contemporary historians have begun to deconstruct ideas of the "other" quite analytically, as evident in Ronald Takaki's work like a Different Mirror.  This does not however diminish the stature of Said's text.  He was the first to conduct a systematic study of this Orientalist mythology.  There is this mixed duality with perceptions of Vietnam, Cambodia or in fact all of Asia.  There is a permanent tinge of the exotic to Asia for the West.  To get a better understanding of Orientalism, you can see a number of his interviews on Youtube.
Posted by Sensei Maruyama at 12:34 PM