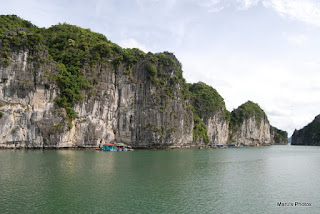 Of course, this is Ha Long Bay, Vietnam. 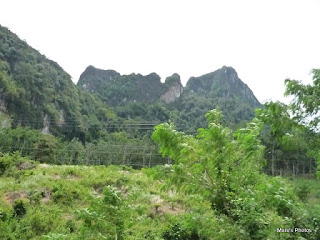 This is the view from Phang Na Province, on the road back to Bangkok.  Khao Sok National Park to be exact.
The soil in Thailand, Vietnam, and Cambodia is red in color.  Limestone formations also dot much of the Southern part of Thailand, and it looks very familiar to Vietnam's Ha Long Bay profile.
There are soil maps that you can see here from Australia.  Geologically, much of this area was under the sea.  The limestone formations are a direct result of the receding seas leaving these interesting formations.  The deep rich red soil seems to allow anything to grow from rubber trees (Malaysian source), Palm oil, coconut, perfume trees, bananas, etc.
I'm not an Earth scientist.  What I can give is pure observation.  The plains of Cambodia do differ from Vietnam and Thailand.  The land is more flat.  There seems to be less jungle. 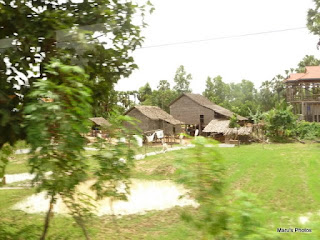 I was unsure if there was an overuse of resources in Cambodia.  I initially suspected there was a level of deforestation, but further inquiries show that it has one of the highest rates in this region.  My suspicions were confirmed by some Internet trolling.  In Thailand, there are checkpoints.  They are not for DUI, but rather for illegal migrant Burmese workers and illegal logging.  Much of Thailand has become a national park under the Royal Family's guard.  To illegally log is to violate the King's decree, which is not a good idea.  I am unsure of what Cambodia is going to do with its rainforests.
Cambodia according to resources found on several environmentalists website, the rainforest went from 70% in 1970 down to 3.1% in the 1990s.  Not only does it change issues of land use, but it changes the profile of the land.

For this region of the world, the major issues of concern will be land use and also management of natural resources including wildlife.  In some parts of Vietnam, wildlife poaching is also a problem.  Some of this is related to China's appetite for specific wildlife for medicinal purposes.  The thing with 2 billion Chinese around . . .  how can it be sustained?

Posted by Craftsman Village Historical District at 1:59 AM