Who is this Tim Page I keep coming across

We Were Soldiers Once—And Young
We Are Soldiers Still
During this trip, I brought along two books.  They are penned by Lt. Gen Harold G. Moore and journalist Joseph L. Galloway.  The first book is the source for the movie, We Were Soldiers.
I’ve begun to view the texts as a sort of metaphor of the Vietnam War in ’s psyche.  Whether or not I will use these books in a class is up to speculation.  How many people really want to read a  book about a battle?  It isn’t exactly fiction.  It’s nonfiction, but unless you are a war buff, probably not the most universally appealing.  I’m fascinated by military history, so that colors my viewpoint on the text too.  How could I get away with assigning this text?  On the other hand, I did need to think about what exactly I was going to do.  My initial project of using contemporary literature translated into English has been met by a through lack of texts available.  Turns out, most of the important writers are already translated and published in English, having come from a specific time in which censors were more open to textual innovations.  I have been struggling with what to do to meet my Fulbright Hayes GPA obligations, but the previous assignments would stand. 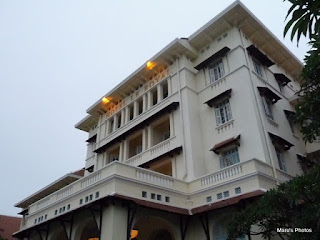 At one point in time, I had accompanied photographer Brian Doan to an interview ironically in .  The hotel where this was going to happen is called Raffles now, but it is better known as Le Royal.  It was here that many of the reporters to the Vietnam War were housed.  It was here that I would meet a person now mentioned in the second book, We Are Soldiers Still.  I met Tim Page. 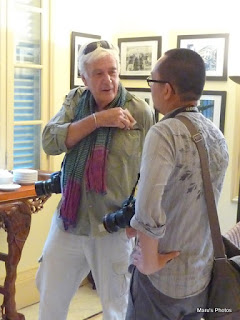 The two photographers meet.  One older, one younger. 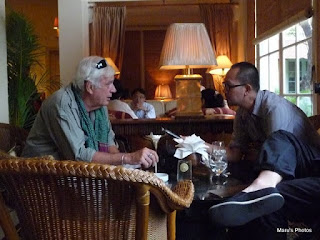 Brian gets to interview a photojournalist legend. 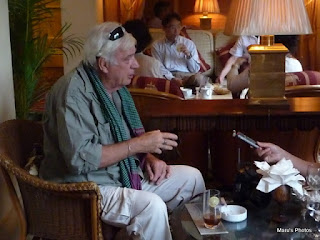 He was openly critical of the US Military policies. 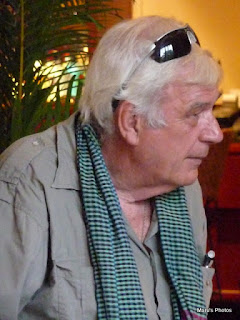 And you can tell he is still an intense man.
Now older with a distinct accent that sounds Australian but not exactly so, Mr. Page was initially resistant to talking to Brian.  Eventually the ice was broken, and he allowed Brian to interview him.  Now, for me, the Vietnam War is a historical record.  For Brian, it is a historical reality since he is Vietnamese.  Mr. Page gave a pretty good interview, but I remember him saying that has a problem with getting beaten up.  There were additional musings about the current 2010 wars in and .
I did not realize what happened until I got to , and I finally got to read carefully the texts that I had brought with me.  The pace of the trip did not allow me to read or to prepare properly.  Most of the trip is a haze of bus rides and hotels.  I had my friend, Dr Sunya Ratjatawan, pick me up, and we promptly drove down to the Tsunami impact zone of Khao Lak, Phang Na.  We returned after 5 days, and only now have I been able to open up my books to examine what I have accumulated.
Tim Page is everywhere.  He was mentioned in a magazine on the Vietnam War.  He was mentioned in one of those books that I read.  He was mentioned in some articles I saw on the Internet.  I shook hands with a veritable legend.  Amazing.
It is all beginning to align, but it is all mixed.  I ran a lecture about PTSD and my experience with Veterans in my classroom.  I tend to get a lot of veterans in my classes, so I have some familiarity with the problem.  Eventually, I touched upon Brian and Chef Stephen’s stories, but there was something more to it.  I read about this need to revisit Vietnam in a Vietnam War History magazine.  As I read both of these nonfiction texts, the model was the same.  2 of the professors were trying to answer unanswered questions with this trip.  Equally, a Lt. General and a journalist were also trying to go back to to answer certain questions.  Corresponding to both of them is the fact that Tim Page, the famous journalist, was also ever present.

My psychologist friend explained to me what they were doing.  It's a form of psycho-drama, which stems from Gesalt Theory.  It is actually a real therapy treatment plan.  Essentially, when you have unfinished business, you must somehow purge these things from your psyche. This could include elements of ritual, reenactments, revisiting old places.  Tim Page was shot up pretty good during the war.  I'm wondering if he is there for the same reasons.  Other journalists also returned recently to the Caravelle Hotel in Ho Chi Minh City.

Strange how texts shape up. It is very weird to actually meet people mentioned in texts.  It is also strange to see psychological therapy treatment plans actually revealing themselves in the texts.
Posted by Sensei Maruyama at 8:53 PM