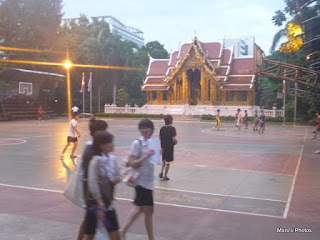 These are the last days at ABAC, or otherwise known as Assumption University in Bangkok.  I'm working with friends at the Graduate School of Psychology.  My best friend from high school, Dr. Sunya Ratjatawan is in charge of the practicum students.  I had a number of things that I wanted to do here, and ABAC was my base station.
1.  Deal with my scholarship program.  I returned to Khuk Khak School during my first week in Thailand.  Khuk Khak school basically goes from K-6.  Prathom is what they call it here. 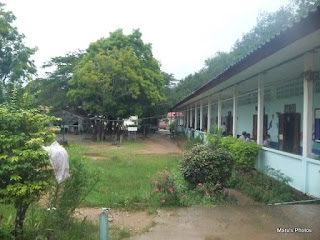 Rural schools in Thailand are very poor.  When the Tsuanami Children Foundation (TCF my little NGO) had arrived, we managed to get power to their computer room, some software, a DVD player, and I helped to develop some curriculum to be executed by the Princeton In Asia fellows.  For the most part, TCF is now going to be a scholarship program.  It could have been bigger, but other than myself, none of the people had any real NGO management experience, and it took all my efforts to keep the projects alive, let alone grow.  To salvage the status of TCF, I've shifted the organization by sheer will to a scholarship formula.  I'm not known for being Mr. Fix It for nothing, you know.
A scholarship program?  In order to do this, I have to find students.  Initial inquiries through ABAC did have some leads, but the candidates didn't screen well.  Returning to the tsunami related school in Phang Na, I was a little disturbed.  The area has not faired well.  The initial influx of relief work financing and economic stimulus was gone.  Gone are all but a few groups.  Still, Dr. Ratjatawan and I managed to talk to the Khuk Khak administrators, and we have a tentative agreement to sponsor a child.  At 2,500 Baht a semester, it is possible, and given a 10,000 US equivalent donation from Singha, we should be sustainable for at least a while.  By the way, at the 2010 exchange rate, that's just over 60 dollars.  For 60 US dollars, you too can send a child to school.  Technically, all Thai public schools are free, but it is the other costs that make things difficult.  Thai literacy rates are actually pretty good.  I have to follow up on this.  We have an agreement, but no scholarship candidate yet.  The Takuapa School District had some ideas, but I will be back in the USA by the time I have a clear answer.  On the other hand, the process has begun.  In Thailand, things are not always done quickly.  It takes time.
2.  Set up a program to insert GSP interns at Yaowawit School. 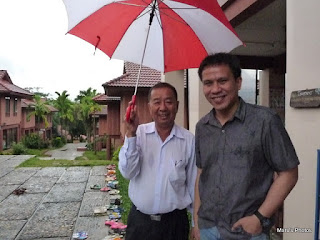 Yaowawit, or Children's World Academy is located in Kapong, Thailand.  It is geographically near Takuapa, which is the district impacted by the Tsunami.  Pi Wit, is the principle of the school (holding the umbrella), and Dr. Ratjatawan (standing next to him in grey shirt) and myself met up with him.  We had worked with Yaowawit earlier, helping to counsel the teachers on interventions and counselling issues.  I had tried to get Princeton In Asia involved to insert long term ESL interns, but they changed their mind, soon after the economic downturn of 2008-9.  Dr. Ratjatawan was going to set up a program to send interns to the school to offer practicum hours of counselling.  This was the other purpose of the trip. 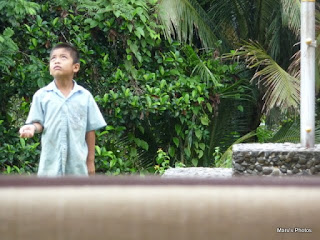 The profile of the student body is generally quite tragic.  There are a number of children who survived the Tsunami, as well as HIV orphans and extreme poverty cases.  They are housed here, and they are fed.  The school is self sufficient.  They have several acres of land, and actively farm and raise their own produce.  There is a hospitality training center, which trains students to work in hotels.  It also generates income.  Given the exchange rates, the budget for Yaowawit School isn't always set.  This was the plan from the beginning.  I have to give it to Germans.  They know how to figure out a way to do things.  The Yaowawit people are also good at developing alternative income streams.  They do not want to be purely dependent upon donations, which is why TCF is basically now a one pony show. 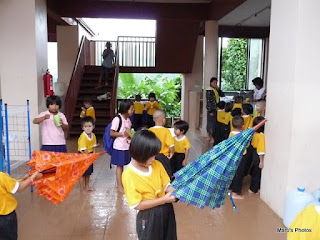 The students are generally well behaved.  When we first had worked with the school several years ago, the place was in disarray.  Student behavior was not good.  Teachers were frustrated.  I managed to get Dr. Ratjatawan working with them actively, and it ended up pretty well.  Now returning to the area from Bangkok after over a year, Dr. Ratajawan was asked about teen problems.  Many of the children are becoming teenagers, and the principle is worried about teen sex, drugs, alcohol and smoking.  It's an ongoing problem with any teenage population.  Yaowawit is no different than any other school.  It is unique in that it has students from kindergarten to high school.  This is why the placement of interns is going to be good.  We will also have a consistent presence at the school, and I can find out about any ongoing issues.
I'm the one who writes the MOU proposals.  The sending of the interns to Yaowawit is a done deal.  I drafted the MOU, and the ABAC GSP faculty approved it.  The MOU will be faxed to Yaowawit soon for signatures.   This is step one.  What is step two? 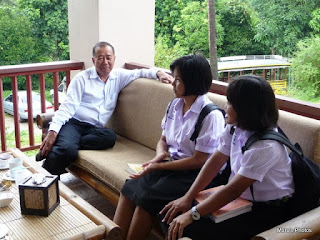 One of the other things that I did with ABAC is to set the groundwork for potentially recruiting students from Yaowawit to go to ABAC.  This was done about a year ago, when I had first visited the university.  I had a good meeting last year with the head of ABAC, in which he said that they could find money for special cases.  I had pitched that it would be good press for ABAC to help out students in real needs, or with complex histories.  The head of the college agreed, and I have been working on this ever since.  Dr. Ratjatawan and I are covert philanthropists.  We may not have money, but we can find ways through connections.  These two girls are the ones that we think might be good candidates, and we are going to monitor their academic progress.  I follow up on things, so I will push the agenda forward.
3.  Gratis Lecture
At one point this week, I had been asked to give a gratis lecture on scholarships, and also a brief presentation on my Fulbright Hayes GPA experience.  I explained to several students about the different strands of Fulbright scholarships and grants from the US State Department's version to the US Department of Education versions.   I basically went over the application process requirements for the PhD students in terms of scholarships and grants.
I also went over the issues of NGO and the set up of nonprofits.  This was more of a sober discussion, as I had used Yaowawit as an  example of how quickly an NGO can be set up.  With German/European financing and Royal Family of Thailand backing, the school was instantly created.  However, most NGOs do not have this luxury.  We all basically work on a shoe string budget.  I also explained issues about expectations, and the inherent need to really know what you want to do.  Also, I warned them not to base their budget and operation on donations only.  It is a recipe for disaster in terms of sustainability.
Charity work is fun for me.  It forces me to go to places that I would not normally go to.  It also grounds me.
I had thought about Vietnam and Cambodia as of late.  I had a detailed discussion with a monk trying to set up his NGO, and I went over some of the problems.  It will take me some time, but if I use ABAC as my base for the region, I think some good things can happen.
I have only a few days left, and so much needs to be done.  Time.  That's the hardest commodity to manage.
Posted by Sensei Maruyama at 2:26 AM