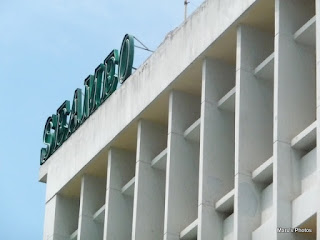 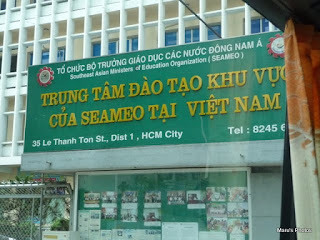 SEAMEO RETRAC or South East Asian Ministers of Education Organization Regional Training Center was the Vietnamese sponsor for the Fulbright Hayes GPA people.  According to sources at the US Counsel General in Vietnam, they are probably the most innovative of the educational bodies in Vietnam.  They made the arrangements in Vietnam/Cambodia for us.

We had visited a number of colleges and universities during the trip.  The system in Vietnam and Cambodia is somewhat different than the USA.  It is a closed system in terms of admissions.  You have to score well on the exams to get to any sort of higher education institution. 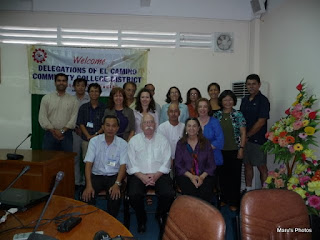 Generally, we were always well received.  As you can tell, we are always posing for group photos.  The fact that we are from the USA seems to make it more important to them.   You could think of them saying, "They actually flew across the Pacific to see us." 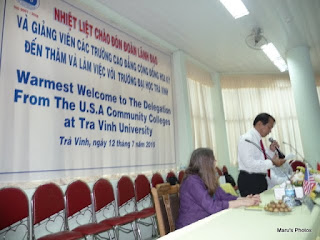 This university had an elaborate presentation about the minority groups represented in the Mekong Delta. 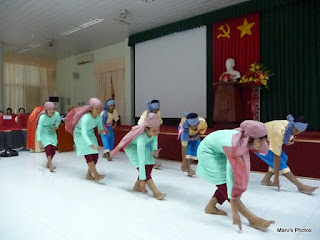 So this is the sense of what was going on during the trip.  We were also ironically showing up during their semester breaks, so getting to more colleges and universities was problematic for the schedulers.
What is interesting is that Vietnam is experimenting with the Community College formula.  Dong Thap Community College was an important stop.  They are however not open access like the US Community Colleges.  This is something that I found very interesting about Vietnam.  Although it is a Communist country, education isn't always equally available.  You must test to get access to a college. 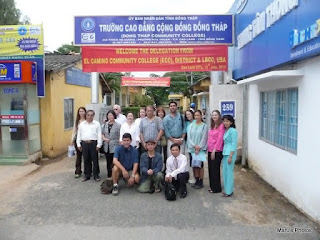 Remember this pic?  Yes, we were really there.  The head of the college was actually very very nice.  He managed to secure better housing for us, when the hotel we were booked at was really scary for many not used to travel in this part of the world. 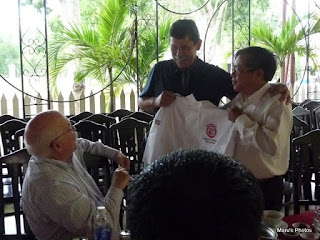 As noted before, to show gratitude, and also for paying for our lunch, Chef Steve gave him a cook's uniform.  This was greatly appreciated.  I posted a different picture of this, but Mike's reaction was not documented in the precious post.
All of the colleges and universities in Vietnam, also to a certain extent, Cambodia, have a high graduation rate.  This is because they actively screen their students.  Now, this is good in the sense that generally students accepted will graduate.  What is not good is that your life is basically determined when you are 17 to 18 years old. 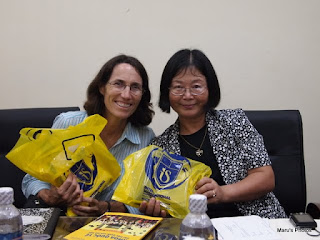 The visitations by these American professors turned out to be a big thing.  We were often given gifts, as evident in Jeannie's and Joy's display here.  Now, there seems to be a clear difference between the two systems, especially Vietnam versus the USA.  The universities are highly specialized.  They are not like our land grant universities that offer multiple disciplines and majors.  They are devoted to specific areas like the sciences, arts and languages.  The concept of a general education plan is not even a part of the system.
Cambodia is also proving to have problems with their higher education system.  The Royal University of Phnom Penh was shut down during the Khmer Rouge days.  It has since reopened, but it is a public university with a unique problem--keeping the faculty.  The pay rate for the public university professor basically stinks in Cambodia.  They are finding many fly by night, basically for-profit colleges and university's popping up everywhere.  In terms of maintaining the academic rigor, it is an uphill battle of keeping up with the attrition of their faculty being lured out by private universities. 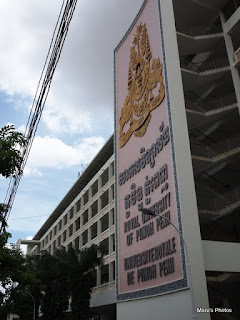 Whatever your thoughts, higher education in Vietnam and Cambodia is important to their economies.  Without a developing pool of intellectuals, you can not compete in the global oriented economy.  As with Thailand, they are also a part of ASEAN.  While at ABAC, I saw a few Burmese, Vietnamese and Chinese students.  I also noticed a higher number of Iranian students, specifically maybe due to the recent protests that occurred there.  Strangely no Cambodians, but then there is long standing political conflict related to Preah Vihear temple.

General Ideas & Thoughts
There were a lot of lectures during the trip.  However, I am not going to go over any specific lecture, as it seems that there is a limit to speech, specifically in Vietnam.  The intellectuals are mindful of the limits of their discourse, and some of the discussions were on very touchy subjects, like politics.  So, for the sake of being ethical, I'm not going to clearly identify who said what and where.  I will have to generate a simplified broad analysis.
1.  They like our system.  Their jaws dropped when we said anyone can go to our colleges.  Our community college system ironically is more Socialist than their system in Vietnam.


2.  They would like to change the system.  The US model is highly attractive to them, but our model may not be possible.  The organizational structures are already in place.  The testing system is fully entrenched in Vietnam and Cambodia. Change is difficult.  US style research based universities are not the norm.  The one land grant style university, Can Tho University, is located in the Mekong Delta, the South. It was established in the South prior to the fall of Saigon, so it retains a US structure of a broad academic departments.  It is the university that is focusing on the issues of the Mekong Delta.  That project is called Mekong 1000.  However, the Vietnam National University is modeled around the Soviet model, so you don't get students with a general education background.  You are also not certain if they get any general education.


3.  The Vietnamese intellectuals take academic risks, but they are not stupid.  Many of the Viet academics were very careful in their statements.  You had to read between the lines to really hear what they were saying.  It is still a tough job.  Professor Joy Zhao did some surveys about the most important books in Vietnam, and the responses were pretty standardized.  Ho Chi Minh was always on the list by the way in Vietnam.


4.  Support services.  We have support services, but it is because we are more open access oriented.  We have to serve the needs of a wide population with even wider disparities in terms of academic preparation.
5.  Facilities.  I would say that some of the facilities are not on par with US universities, or even some of our community colleges.  They are trying however.
As it is right now, I got no buzz words that are floating in US Educational discourses like student learning outcomes, course outlines, and other matters.  Most of the students in Vietnam, Cambodia and also in Thailand are very passive according to some interviews.  They sit and listen.  They generally don't question.
Overall, I would say that there are benefits and drawbacks to either system.  Because of our open access in the California Community College System, we have more problems in terms of retention, graduation rates and other matters.  But we do offer a student a pathway.  On the other hand, their system is closed, but it seems that they don't have the same problems in terms of student preparation that we have.  You don't have to worry about variables like academic preparation levels.
It could be worse like in Burma.  The University of Yangon is basically shut down.  Burmese students are showing up in Thailand, specifically because many of the higher education institutions in Burma were shuttered by the junta.  In this way, Vietnam has made more progress in terms of academic freedom.  Cambodia is basically still in the process of rebuilding their system.  Remember, during the Khmer Rouge years, if you were an academic, you were killed.  An entire generation of intellectuals got wiped off the landscape.  It takes time to rebuild such a huge loss of intellectual capital.

American students do not know how lucky they are.
Posted by Sensei Maruyama at 3:42 AM