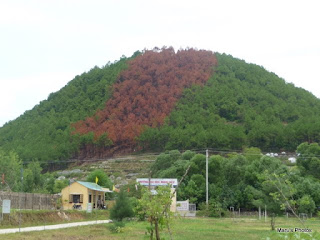 Take a look at this very closely.  We were in the vicinity of Hue, but the strip on the hill was very prominent.  I asked someone what it was, and the Vets responded, "That's Agent Orange."
The US Veterans Administration admits that there are issues connected with Agent Orange.  It was an herbicide designed to try to remove one of the most basic advantages for the Viet Cong and the NVA, which is the jungle canopy.  The Vietnamese NVA and Viet Cong used their terrain to their advantage, which is effectively noted in Sun Tzu's The Art of War.
Recently in Nan Dan (a Vietnamese newspaper) there was an article focusing on the victims of Agent Orange.
Agent Orange is one of several things that this part of the world has been subjected to.  The US dropped hundreds of tons of ordinance in this part of the world.  Vietnam era bombs and landmines are found everywhere.
Posted by Craftsman Village Historical District at 8:51 PM