The Mekong Delta and the Country folk profile 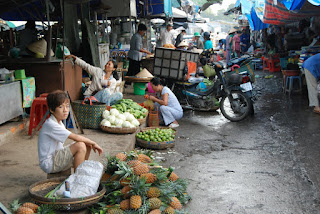 Economic development in Vietnam has been rather rapid.  Given this rapid growth, there have been other problems that are gradually beginning to emerge.  One factor often discussed is corruption.  Yes, corruption exists, but this is more of a social phenomenon rather than purely an institutional issue.  All governmental organizations have corruption, but they just use different nouns.  In Vietnam, it is corruption.  In the USA, it is called lobbying.  I'm not necessarily concerned with those issues for this posting.  I'm more fascinated in how different the urban areas are in comparison to the rural areas.  In the rural areas, you see more evidence of poverty.  You can see this in the Mekong Delta, which happens to also be the backbone of the Vietnamese economy.

What exactly is Vietnam's governmental structure?  In some ways, it obviously echoes some elements of Communism as it mirrors the behavior of China during the late 1980s, and 90s.  I would propose that it is a hybrid state.  According to Marx and Engles in the famous Communist Manifesto, they say:


The socialistic bourgeois want all the advantages of modern social conditions without the struggles and dangers necessarily resulting therefrom. They desire the existing state of society, minus its revolutionary and disintegrating elements. They wish for a bourgeoisie without a proletariat. The bourgeoisie naturally conceives the world in which it is supreme to be the best; and bourgeois socialism develops this comfortable conception into various more or less complete systems. In requiring the proletariat to carry out such a system, and thereby to march straightaway into the social New Jerusalem, it but requires in reality that the proletariat should remain within the bounds of existing society, but should cast away all its hateful ideas concerning the bourgeoisie.

It's called CONSERVATIVE OR BOURGEOIS SOCIALISM.  I do find the dialectic concept defined by Marx and Engles to be flawed.  There are levels of classes, and levels of workers.  Dialectical constructs require the clear validity of a clear duality.  This duality doesn't exist.  In fact, there are more pressing issues.  Marx and Engles, Lenin, Mao, Pol Pot, Ho Chi Minh:  all of them believed that the proper distribution of wealth in a society was going to create a better society.  I am of the position that wealth and the division of wealth does not automatically equate with happiness and well being in a society.

Supposedly a Communist system or a Socialist system idealizes the proletariat, the peasant class.  However, when you go our into the countryside, the farmers are the most destitute.  Like the USA, you have a country in which people can buy a car in cash, but others are struggling to meet their own needs.
Posted by Sensei Maruyama at 9:35 AM