Hanoi and the Ghost of Ho Chi Minh

No study of Vietnam can ignore Ho Chi Minh or Uncle Ho.  None. 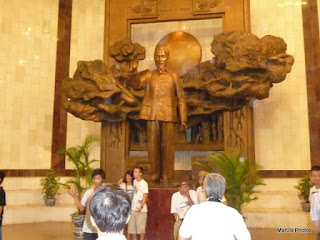 Statue which greets you upon entering Ho Chi Minh Museum
Ho Chi Minh is a complex figure.  People literally were standing in line to take a picture of themselves with his statue at the Ho Chi Minh Museum.  If you look at the very closely, you can tell that there is a deep Soviet influence here. 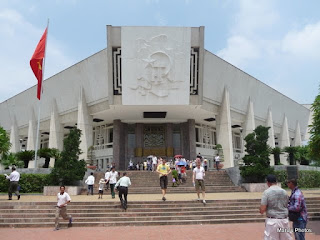 Soviet Style Architecture of the Museum
From a historical perspective, his ability to lead a country from basically a condition of perpetual war to what is now considered a lion of is very complicated.  Uncle Ho never realized his dream of a unified .  This is a fact often forgotten by Americans.  In fact, it is said in , that the Tet Offensive effectively broke the heart of Uncle Ho, as his usual message of peace annually issued during the Tet holidays was used as a trigger for what would become one of the most serious combat during the Vietnam War.
A visit to the Ho Chi Minh Museum was equally complex.  As a foreign observer, much of the art work displayed was almost purely 1950s Soviet style in terms of aesthetics.  Also, there were a number of letters on display.  What is not questioned is the role and presence of Uncle Ho in the Vietnamese psyche.  Instead of a number of Founding Fathers as in , there seems to be one founding father as embodied in him.  The question is why?  General Diep was significant.  General Ah was significant.  But it seems that Ho Chi Minh carries a fatherly image.
Small artifacts of his have power.  In the museum, an ordinary table and chair set would become icons. Of course, they were placed in a museum for a reason.  Historical significance. 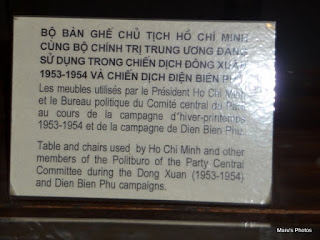 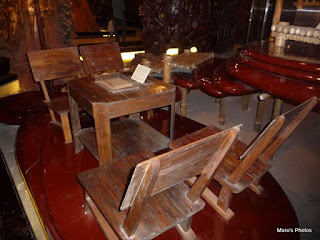 The table and chairs on display. 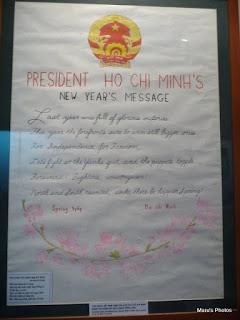 Even at the Hanoi Hilton, you can't escape the shadow of Ho Chi Minh.
What is often untold is that the letter that you see above was a tradition of his.  He would send out a letter hoping for peace during the Tet holidays.  The thing that perhaps bothered Uncle Ho was that his letter was used as the signal to start the Tet Offensive.  This effectively spelled the destruction of the historical city of Hue and other historical sites.  It was also something that directly contradicted his own words of reconciliation.  The more you study Ho Chi Minh, the more you realize that America failed to understand that they had a potential ally.  The bigger question is: Would Uncle Ho recognize the Vietnam of today?  I'm not sure.  The level of commerce however probably would have been unthinkable in his day. 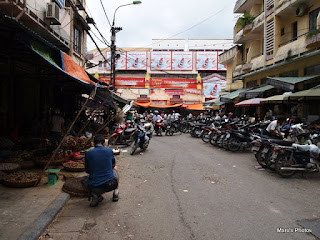 Street Scene Old Hanoi
is a busy city.  What will immediately impact you when you visit this country is the pervasive presence of scooters and motorbikes.  Most of them are under 200cc.  The other aspect is the active level of commerce on both corporate and individual levels. Vendors are everywhere.  Chef Steve found the level of local commerce for produce and spices and dried goods to be amazing.  Some vendors wear the iconic Vietnamese hat and walking with items carried over their shoulders. 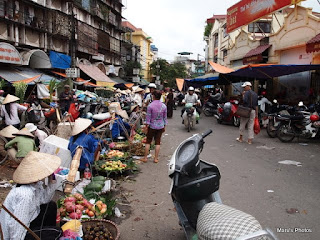 More of a wide angle shot of a previous photo.

Local street food vendors are everywhere.  It is similar to , but the level of competition is almost rabid.
You can’t go to without seeing the Mausoleum.  Unlike the more mellow persona that I think defined his personality, the building is rather Soviet in architectural design. 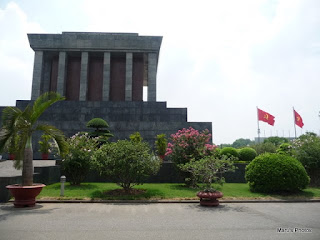 The Mausoleum
It is sort of like going to and not visiting Lenin’s Tomb.  You just have to do it, as it seems to be a societal cornerstone.  When you visit Ho Chi Minh’s Mausoleum, it is sort of a weird surreal exercise.  There is a long line that you are required to get into.  Then, your cameras are taken right before you get into the Mausoleum.  You are required to wear appropriate clothing.  You are not allowed to have your hands in your pockets.  Hats must be removed.  It is basically going to a secular version of a cathedral.  All of this is for the purpose of walking past a body under glass.  Now, I don’t know if it is really Ho Chi Minh.  He wanted his body to be cremated and to avoid the Lenin cult of personality aspect.  What I found interesting was that it was sort of like going to for the Vietnamese.  I really wonder what Ho Chi Minh's ghost is really thinking right now.
In , many of the countries have a monarchy.  In , the role of the King is unquestioned.  The Royal Family is revered in Thailand.  In , the King has returned after much turmoil under the Khmer Rouge.  Occasionally in both countries, you see pictures of the king displayed prominently in homes.  Uncle Ho also seems to play this role in Vietnam.


Great leaders are well respected in these countries.  In fact, even if you die, they will remember you.  This is not the case really in the USA.
Posted by Sensei Maruyama at 2:43 AM