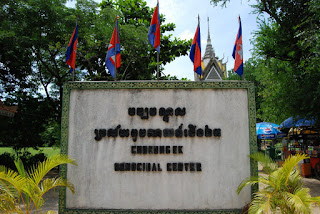 This is not going to be an easy meditation. Genocide is a heavy topic, but it also represents how horrid human beings can be.  Humans are capable of great good and great evil.  There is a duality in humans.


The History
In terms of an overall background, the Khmer Rouge basically ran the country into the ground during their short time in power.   For an in depth study of this dark period go here.  Yale University has also developed the Cambodian Genocide Program, which has a good website.

The other complex thing is that a genocide location is now a tourist attraction.  This is weird.  An article in the National Geographic outlines this strange phenomenon.  You are visiting a place in which hundreds of people died.  About 1.7 Million people were killed, but in terms of percentages, about 21% of the total population in Cambodia were killed or murdered.

So, what is the experience?  Depressing.


The Results of a Mad Man's Insanity 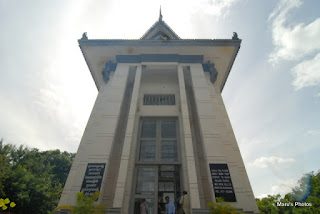 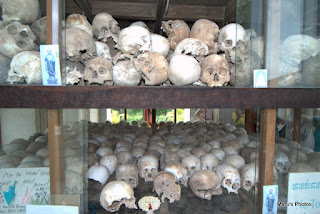 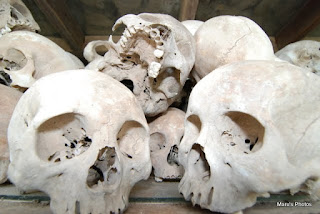 The depth of the tragedy can only be known when you go to the actual killing field site.  It is one of many sites scattered throughout the country.  21% of the total population died. Why?  It was purely for the sake of a utopian ideal.  Utopian ideals have a tendency to become dystopian ideals.  The desire to create this utopian society generated a huge level of collateral damage in Cambodia.  The people died for the sake of an ideal society without money, without property, without family, without all of the "capitalist" artifacts.  The dead have something to say to Pol Pot.  You are going to be tried. 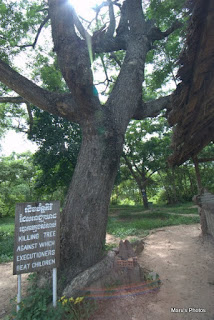 Next to this tree is a pit in which hundreds of bodies were located.  Most of the women were naked.  There is discussion that the women were probably raped prior to their final moments.  How an entire government can condone such an act escapes people  What is more clear is how willing people are to do such a thing.  The Milgram Experiment may be a good explanation in regards to why people did what they did.  Some probably just did it to fit in with the Khmer Rouge, and probably to avoid becoming a victim as well.  It could be class related, but if this is true, then it shows that any class that dominates a particular spectrum of society may be prone towards such cruelty. 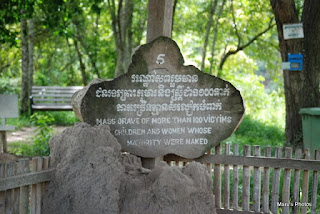 What I did find interesting was that some ideological people still try to deny that this was possible.  It was not Communism!  Well, then what was it?  It was a failure to envision it!  Not really.  The Khmer Rouge was interpreting Communism to the letter.  All people who were perceived as Anti-Revolutionaries were eliminated.  The assessment as of this point is that an ideology is a means towards and end.  It is a mythology that allows a person to justify a decision to either kill or rape or murder.  A political ideology doesn't mean anything more or less than religious ideology.  All ideologies are based upon a mythological construct that allows a group of people to interpret the world, and the respective communities. 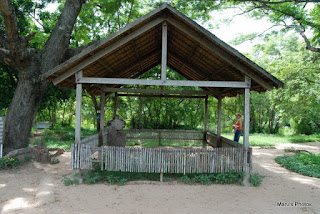 The following of a mythology has consequences.  We are all defined by our respective societal mythologies.  In the case of Cambodia, the mythology was obviously flawed, as the body count rose higher and higher.  This is in contrast to the overall friendly nature of most Cambodians.  They really are very nice.  It isn't even related to Hitler, as he was an Anti-Semite, and targeted a population.  Pol Pot tried to kill his way back to a Feudal time.  In some ways, it seems that Marxism or Communism has this desire to create a feudal society in which the peasants have won. 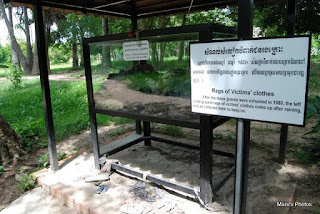 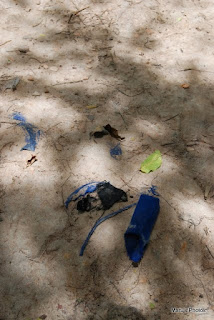 The Killing Fields is one huge graveyard.  You are walking on the dead.  This is literal.  It isn't a fib.  It isn't a fabrication.  It isn't propaganda.  It isn't a lie.  As you walk through the area, you come across clothes that are slowly being revealed after the rains.  They almost look good enough to wear.  How did they get there?  They were on the people who were killed.

Within lets say a 10 square foot area, you could potentially have several hundred dead people buried in shallow graves.  As you stand by an exhibit, you potentially could be standing on the bodies of hundreds of men, women and children, who may not  have had anything guilty other than being a TV actress, a doctor, a lawyer, a teacher, or a professor.  Yes, that means me.  If I was Cambodian during the Khmer Rouge, I would be dead.

Even as you try to get over the fact that you are walking in one huge grave site, you can't help but feel that things could have been better if the US actually did something positive during this time period.  Historically, the United States has some baggage with the Khmer Rouge. It had not necessarily criticized them even after they retreated into the jungles to fight on after their defeat by the Vietnamese.  Vietnam stopped the genocide, not the United States.  We have not been good about that.  Well, enough of the words.  Pictures are more effective. 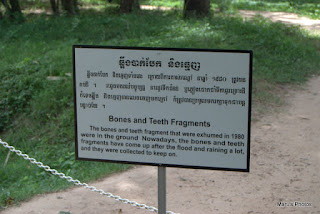 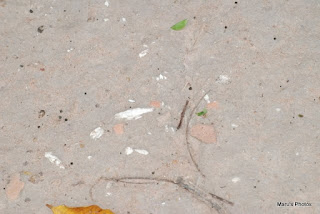 Those are real bone fragments. 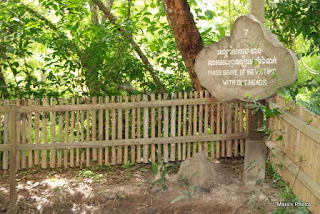 They believe these were political prisoners who had their heads cut off to prevent identification. 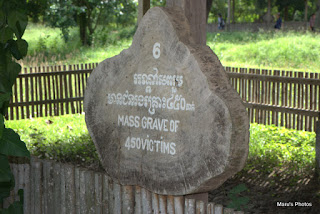 In this small space, 450 plus bodies were recovered. 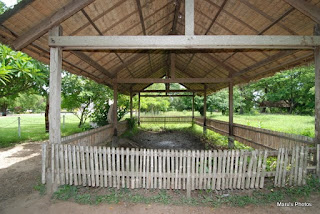 The size of the pits are small.  The body counts high. 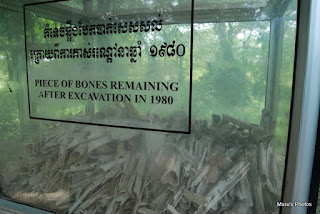 Scattered clothing, scattered bones, scattered dead:   the legacy of a belief in a mythological construct. 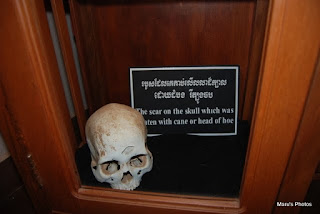 Posted by Sensei Maruyama at 4:34 PM