Hmmmmm.  Let's think like a tourist.  Where should I go? Out of the perpetual noise of traffic and motorbikes, what am I going to do?  People who go to Vietnam appear to be of a certain sort.  Chef Anthony Bourdain lives for this stuff.  Actually, he goes for the food, which is what I do.  But, I'm not a typical tourist or even volun-tourist or anything.  I view everything as a subject of inquiry.  Even the very act of going to a place can be an intellectual exercise whether or not it is going to a cultural show or going to a local bar to watch the people interact.  So what did my bald head decide to do?  Everyone said, you gots ta go to da Water Puppet show.  You gots ta.  So I did. 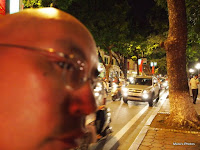 A Show Only Tourists Go To.  In Vietnam, the Water Puppet show is sort of the big draw for foreigners.  It is a combination of a traditional Vietnamese band with puppets set in the water.  One thing I noticed was in Hanoi, I didn't spot a lot of Vietnamese people in the audience.  What did I see?  Well, musicians initially.  They were pretty good.  As far as I can tell, the music had some heavy duty Chinese influences, but don't tell a Vietnamese person that line. 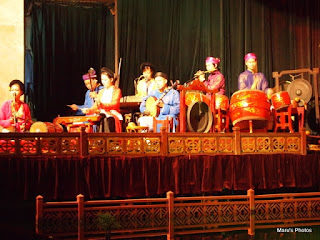 But what about the puppets.  Well, that would show up soon enough. 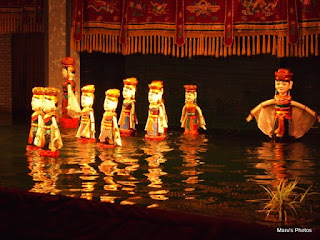 As you can tell, the puppets are in the water.  Originally, it was a way for the villagers to entertain themselves during the flooding that would become a pervasive part of the agricultural economy as defined by the rice harvest.  This form of entertainment would develop into this water puppet performance, which now seems to only exist in tourist spots. 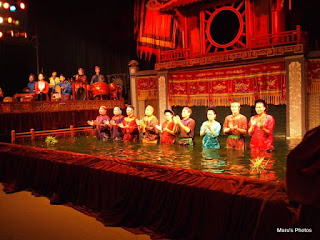 Of course, the puppeteers came out after the performance.
Posted by Sensei Maruyama at 6:41 PM