Art, Museums and the State: the Shaping of a Societal Psyche

Art is the lie that enables us to realize the truth.
Pablo Picasso 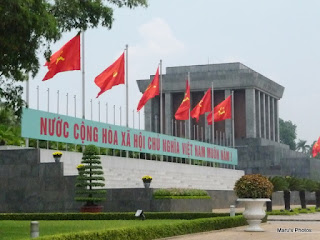 What roles do monuments, museums and other cultural and historical locations play in terms of the psyche of a state.  In the USA, we have Washington D.C.  We have the Lincoln Memorial, the Washington Monument, the Battlefield of Gettysburg.  For this post, I'm going to inspect the role of these cultural icons by reviewing their role in Vietnam.
Ho Chi Minh's presence dominates the landscape of Vietnam.  Basically becoming a version of George Washington, Lincoln and FDR wrapped into one package, Ho Chi Minh's shadow seems to be always around.  What I am wondering however is how much of Ho Chi Minh's thoughts defined what the Communist Regime is today.  Probably, he would not have recognized the Vietnam of today, but this gets into a question of what Uncle Ho was really considering.  He was a revolutionary.  He controlled aspects of North Vietnam, but then Maoism was a shadow ideology that always seemed to permeate Asian forms of Communism.  I think this is a perfect example of how the State often overrides the desire of the individual.  Uncle Ho never wanted a Lenin like tomb, but the State decided to do it anyways. 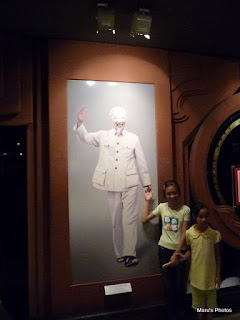 I had met with a  few artists as part of my process of understanding the role of the artist in .  There are certain things that appear to be OK.  Lacquer art is OK.  It is commercial, and it can easily be sold.  Paintings are OK.  Old propaganda posters are OK.  Cutting edge art with social criticism—not exactly OK.  There is a range of permissiveness in  that is somewhat deceptive.  You have the freedom to criticize certain things.  Traffic, the food, the celebrities, corruption—but don’t you dare talk about the government.  It is a standard rule of freedom.  You are free to do anything, but not to talk about everything.  This occurs in other South East Asian countires as well.  Don’t you dare say anything about the Thai king in .  You can go to jail for insulting the King.  One sure way of getting yourself in jail is to throw a Thai Baht on the ground and step on the King's face.  It is a recipe for a very long stay in a Thai prison. 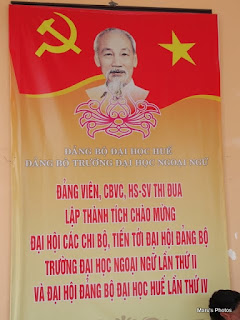 What I also find interesting is that you don't see any portraits of a younger Ho Chi Minh.  All of the pictures of Uncle Ho are of him as a grandfather figure.  Now this might be because of the inherent nature of Vietnamese Society to honor the elders. To be an elder is very important.  In fact, many of the old generals of the NVA are still technically on active duty.  You could be 90 years old and still be considered on active duty.  In America, you would be forced to retire by that age.

Confucian values are very obvious in Vietnamese society.  Regardless of the influence of the Communist party, there are certain things that make it Vietnamese. 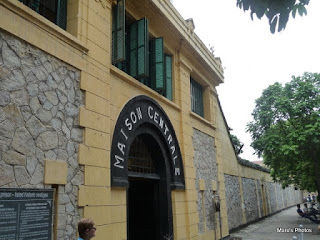 The other thing that seems to be ever present is propaganda and the museums.  A visit to the Hanoi Hilton outlines the inherent nature of ‘history is written by the victors.”  It is fortunate in the  that we can have dissident voices, but lately we have our own censors as evident in Christian Evangelical groups trying to rewrite science textbooks and inserting intelligent design into the curriculum. 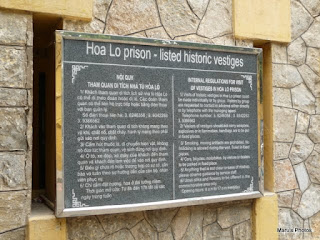 The structure of the Hoa Lo Prison aka Hanoi Hilton is two fold.  It shows how the prison was used by the French to suppress the Viet Minh and the Communist faithful.  Ironically, it seems to focus primarily on its use as a prison by the French more so than as an artifact of the Vietnam (American) War.
The French seem to be very much at the forefront of their minds.  The majority of the museum would portray the French as brutal prison keepers that the Vietnamese always had to outwit. 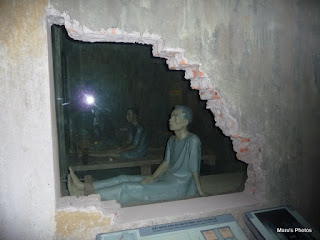 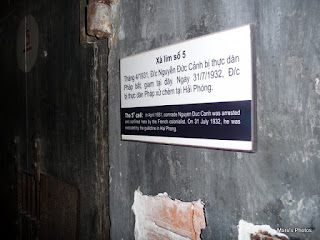 The choice of language is also interesting.  This display is both in English and Vietnamese.  This was a specific decision made by the curators.  It says basically that this is the prison cell for this particular Vietnamese patriot who was executed with a guillotine.
Museums are often interesting cultural markers for a society.  What a society puts into a museum often indicates what is important or perhaps what may be disappearing.  Museums often have two purposes.  They are often places for education.  They are often places for preservation.
But what of the American at the Hanoi Hilton?  It is here that John McCain's shadow comes back. 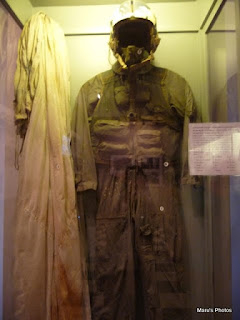 John McCain’s flightsuit is on prominent display in the Hanoi Hilton.  Concurrently, there are two videos espousing the viewpoints of the Vietnamese government about the bombing campaigns and the treatment of prisoners of war in the Hanoi Hilton.  Most of the document espoused to show how humane the treatment of prisoners was during the war, but other testimonies seem to contradict this sentiment.  Also, there is the problem of ’s population being younger and many of them born after the American War.  Their perceptions are being colored by the clear party line outlined in the texts. 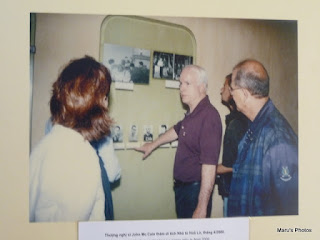 There is a picture of John McCain at the Museum displayed prominently.  Whether or not he intended to become a political chess piece, his image now has a very prominent place in the museum.

The gist of the discourse being pushed at the Hanoi Hilton is that prisoners of war were treated humanely.  This seemed to contradict some of the other accounts that people had during their stay at the POW camp. 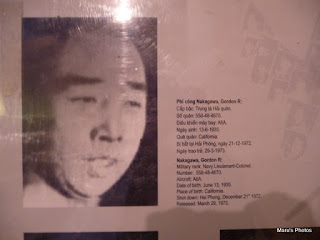 One person struck me though.  There was a Gordon Nakagawa in a booklet showing POWs.  I had flown over 17 hours in an airplane to visit Vietnam, and I found a JA listed as a POW in the Hanoi Hilton.


Vietnam is a country that seems to still being defined by its wartime experiences.  It is not just about the American involvement either.  Remember that Vietnam has been at war with China, Cambodia, America, France.  This nation has been in perpetual war for decades, and the majority of the 20th Century was under some form of occupation.  Even old allies would attack Vietnam as evident in the Khmer Rouge intrusions and the brief involvement of the Chinese shortly after they removed Pol Pot from running Cambodia into the toilet.

In many ways, there is censorship and control in Vietnam.  The museums and other locations reinforce a viewpoint that promotes the legitimacy of the state.  As a democracy, we say that we are more free; I am somewhat skeptical of this statement.  Plato never liked democracies.  A democracy asked for Socrates to commit suicide, and also subsequently followed bad advice and invaded  and destroyed its own empire.  Aristotle would be of the opposite vein.   has a different problem—indifference and white noise.  We have our museums, but I don't think they play the same role as in Vietnam.

What system is better?  I don’t know.
Posted by Craftsman Village Historical District at 3:59 AM