Class struggle, the struggle for production and scientific experiment are the three great revolutionary movements for building a mighty socialist country. These movements are a sure guarantee that Communists will be free from bureaucracy and immune against revisionism and dogmatism, and will forever remain invincible. They are a reliable guarantee that the proletariat will be able to unite with the broad working masses and realize a democratic dictatorship. If, in the absence of these movements, the landlords, rich peasants, counterrevolutionaries, bad elements and monsters were all allowed to crawl out, while our cadres were to shut their eyes to all this and in many cases fail even to differentiate between the enemy and ourselves but were to collaborate with the enemy and were corrupted, divided and demoralized by him, if our cadres were thus pulled out or the enemy were able to sneak in, and if many of our workers, peasants, and intellectuals were left defenseless against both the soft and the hard tactics of the enemy, then it would not take long, perhaps only several years or a decade, or several decades at most, before a counterrevolutionary restoration on a national scale inevitably occurred, the Marxist-Leninist party would undoubtedly become a revisionist party or a fascist party, and the whole of China would change its color..    Mao, The Red Book

Ideology can trump logic, rationality and ethics.  The Khmer Rouge is the most logical extension of Maoist thought about the dictatorship of the proles, as George Orwell would say.  There is a clear problem when the state begins to attack its own people.  When the state begins to fall apart and to destroy the population in which it has decided to rule, then you got major problems dude.

While on the site, I met one of the survivors. 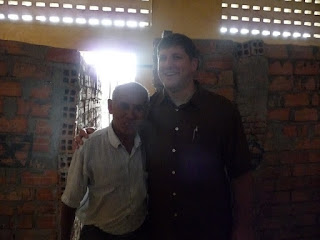 What is S21 or Tuol Sleng?  It was one of several "security" locations in which the estimate is that about 30,000 people passed through.  Only 7 lived through it.  Only 2 exist today as survivors.  This is a dubious history for what began as a normal high school campus.

"You used an ammo case to go to the bathroom.  You were chained to the floor.  You were beaten.  They would cut off parts of your fingers to make you confess to being a spy for the CIA or the KGB.  You have very little access to light."   Pretty grim notations from a man speaking through a translator.  The fact that he was a painter made him important.  He like the other survivor were valued not because they were loyal party members, but rather they could met the vanity needs of leaders. 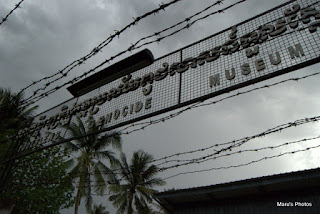 This former high school campus turned into a death camp is now a tourist museum.  This is weird to me.  I do understand the need to remember, especially since there are other genocide locations that have been converted into museums.  Museums are monuments to the dead, quite often.

I have been quite critical of what I call mythologies.  Most people think of mythologies as Greek myths, perhaps the Mahabharatta, or the gods of the Aztecs.  In fact, religion forms what I would consider to be a subsection of the mythological construct.  Political ideologies are also mythologies.  In the United States, we believe in the inherent efficiency of the market economy, but we are unable to understand how unstable that formula could be given the economic downturn that occurred at the end of the Bush era.  We believe in myths.  There is a myth in a form of Capitalism that actually isn't practiced in reality.  Myths are constructs in which we attempt to interpret and justify various human mechanisms that define our existential condition. 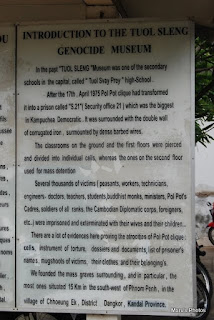 What you encounter when you first enter the museum is a sign in several languages.  For the sake of space, I've only photographed the English explanation.  The ironic aspect is that there are now beggars at the gates. 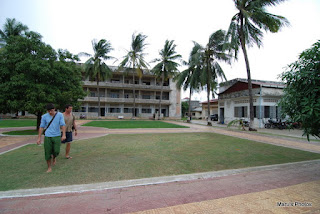 Tourists go around the site and look at the various rooms.  What is disturbing about S21 is the nature of how they preserved the prison.  There are blood splatters throughout the prison.  Locations in which there might be obvious pooling of blood has not been cleaned up.

Most of the people who visit this place will leave depressed.  They might wonder why people do this to each other.  They might in fact have questions about the nature of the Khmer people.  Are they vicious?  Are they inherently cold?  They are no more cold than the Germans, the Hutus, the Spanish.

When did it stop?  Vietnam.  After Pol Pot in his stupidity tried to remake the old Khmer empire by probing the southern border with Vietnam, he got the VC pissed.  Communist or Capitalist, you don't mess with a border.  Vietnam invaded and effectively stopped the genocide. 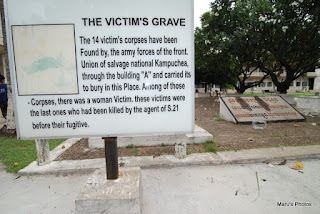 When they opened the gates to S21, the Khmer Rouge killed the last of the prisoners outright.  A woman was among the last 14 who died in S21.  Why? 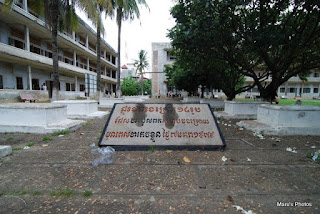 The 14 dead still remain on the property.  The Vietnamese buried the Cambodian dead.  The Khmer Rouge didn't even bother, but just piled up the dead in piles, sprayed chemicals, and let the bodies rot.

For a Buddhist country, this is a big no no.  This part of the world is also very spiritual in many ways.  There are elements of animism in the culture, and there are obvious fears of spirits and ghosts, especially if you see it through the prism of Thailand's culture. 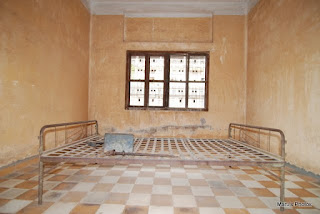 This is the deluxe suite for S21.  Most of the rooms in S21 are small crawl spaces with little room to move.  These rooms in Building 1 are huge by comparison.  You do begin to wonder if the importance of the prisoner defined the size of the room.  The thing about these rooms are that they seem more like torture chambers than anything else.  You have a ammo can toilet, and you are chained to a wire bed.

There is evidence of blood spatters on the ceiling.  Explanations about the torture being used include everything from the cutting of fingers slowly for men, or the cutting of nipples and breasts for women.  Women also had to endure the specter of rape as well. 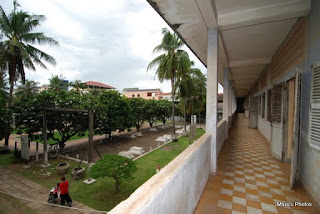 Building 1 appears to be the major area in which people were actively tortured while imprisoned at this site.  Unlike the other buildings, this one did not have the barbed wire, and sectioned off rooms with dark brick enclosures and wooden dark rooms. 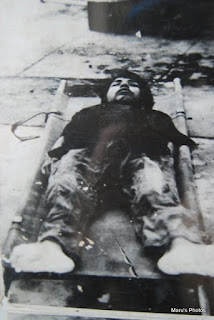 What is very strange about S21 and the entire Killing Fields experience is the level of documentation surrounding these events.  Nhem En was the photographer for the Khmer Rouge. He is still alive.  There are more photos here. 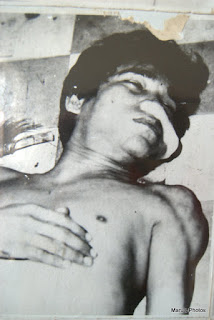 This man was killed by the pouring of acid up his nose.  This effectively fried his brain.  Most of the people who have this foam coming from their nose were killed in this manner. 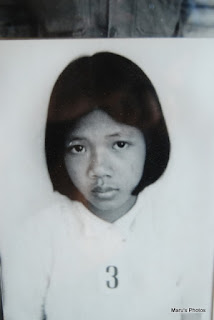 The portraits are very disturbing.  This girl obviously was clueless about what was going to happen to her.  She was not one of the survivors.  She was killed. 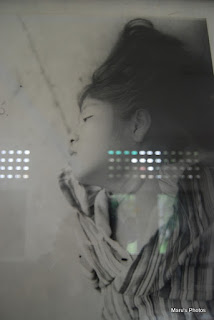 I took this shot in the room.  The reflection of the walls of the high school can be seen in the glass.  She's dead.  There is speculation that it was a Vietnamese girl who committed suicide to end the torture sessions. 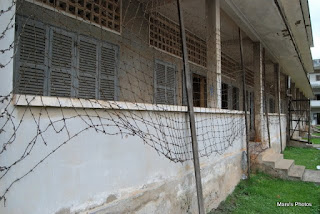 This is the building in which they housed the prisoners before interrogation, torture and eventual either on site execution or preparation and transport to the Killing Field for disposal. 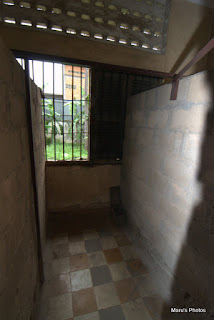 How would you feel like being in a room this size? 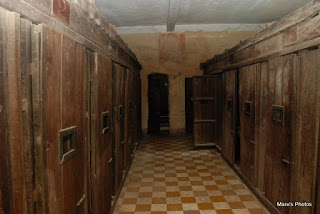 You can get the sense of claustrophobia on the 2nd floor.  You also can pick up clear vibes.  The dead speak in these rooms.  Evidence of dried blood can be seen on walls. 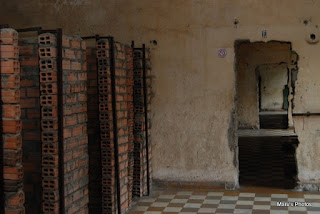 The Khmer Rouge knocked down walls.  They created subsections in the classrooms, and on the walls, they wrote out numbers.  The killing machine was very effective and organized. 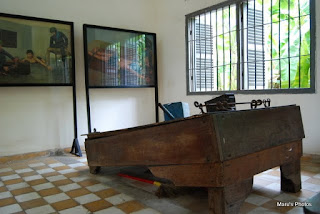 Various torture devices are still left on display.  Pictures of how they were used were painted by the survivor artist.  What you are looking at is an item that killed people.  It is real. 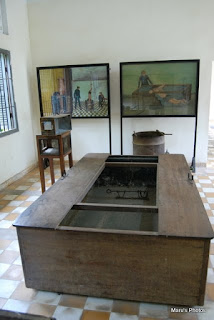 They also practiced waterboarding.  They would virtually drown you in order to make you talk.  The other items behind were used to conduct other waterboarding techniques.  The boxes to the left are items of torture. 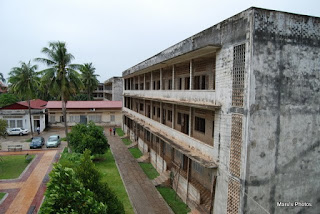 Living death.  This building was the starting point for the deaths of probably, and I repeat probably, 30,000 people.  All of these deaths are the result of individuals surrendering their will to the state.  The guards and interrogators had forsaken their humanity in order to realize a dystopian ideal. 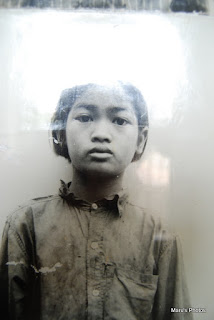 However the shot developed, this girl appears to have a halo around her head.  Obviously, it was the result of bad lighting, shooting through a glass display, and other logical explanations.

In reality, what often gets to you are the eyes.  It is the eyes of the dead who are speaking to you.  They are declaring to all individuals that the mythologies should never be automatically accepted as the truth.

Who can chose who is supposed to live or die?  Who decides what political ideology makes sense for the good of humanity?  Who decides that their world view is more logical than the other persons?

There is more to this.  A visit to s21 or the Killing Fields site is surface reading.  The bodies were often found in unexpected places than s21.  This is documented by the Journeyman Pictures people.  Even visiting the site, you don't get the full picture.

Ideology and mythology can kill.

Ideology has very little to do with 'consciousness' - it is profoundly unconscious.
Louis Althusser


Posted by Sensei Maruyama at 4:36 PM