This was a significant trip for my friend, Brian Doan.  Being a Vietnamese, much of his existential condition has been defined by things not up to him.  In fact, most people have discovered that their existence is not always self determined, but rather it has been defined by circumstances beyond one's control.  We visited what essentially was a "hot zone" in 1972.

The DMZ.  Quang Tri Old Citadel.  Hue
All of these places were points of conflict.  The DMZ's history is pretty complex.  Many people visit various spots around the DMZ, but Brian and I specifically went to the Hien Luong Bridge across the Ben Hai River. 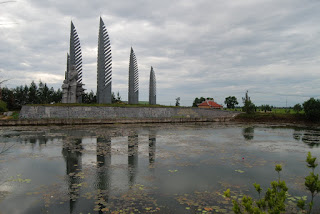 Once you arrive, you get a clear idea of what you are going to note.  Everything in Vietnam related to the American War is memorialized.  On display close to the bridge is a public sculpture portraying the great victory that made the DMZ basically irrelevant after the 1975 victory.

We have arrived very early, so we had the location pretty much to ourselves.  Now, Brian had a different take on this because in many ways, this geographical designation defined his present day life.  Without the war, he probably would still be living in Vietnam.  Now he lives in Long Beach, California.  Whether or not it is good or bad is up to him.  I don't get into personal speculation.  As an observer, I know that it probably left more questions than answers for him. 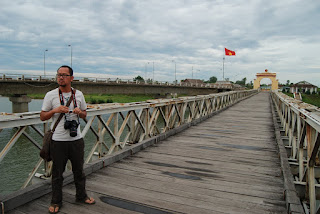 The bridge is relatively old and rickety.  It isn't exactly what you would want to cross on a daily basis.  A new more modern bridge shadows this bridge.  For the sake of tourism, I don't think this bridge is going anywhere soon.  Being a photographer requires you to perceive things in the visual realm.  We guessed at where the middle of the DMZ was. 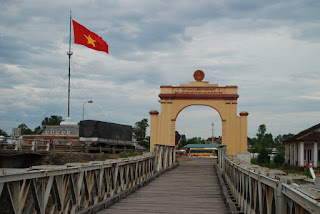 As you approach the North Vietnamese side, you will encounter the obvious monuments to the great victory against the American devil.  To the right is a building that housed the border guards.  To the left is a huge flag with some murals surrounding the flag pedestal.  As you get closer to the end of the bridge, this is how it looks. 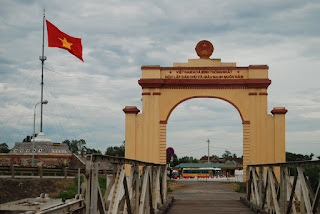 The one thing about the Vietnamese putting up monuments for the American War, they do want to make a statement.  I find it to be very fascinating in how much of the psyche of Vietnam is based upon a victory in war. 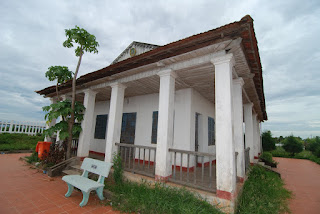 As I noted, to the right was a guard house.  Not very interesting other than what its role was during the war. 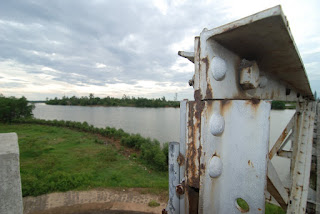 Looking back from the North Vietnam side, I used a super wide lens to get this shot.  The metal is getting rusted.  The bolts are showing wear and tear.  The river remains the same.  Human borders and human monuments do not last forever. 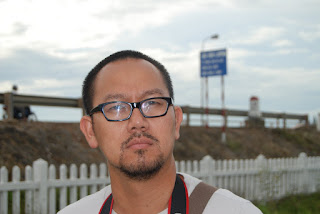 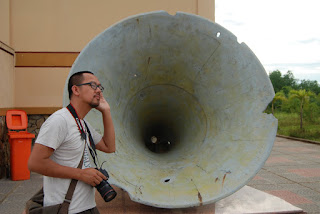 I suppose Brian is still listening to the ghosts of Vietnam.  Actually, these are the old propaganda speakers used to broadcast to the Americans that the war was over.
Posted by Sensei Maruyama at 5:58 PM