Cu Chi Tunnels and the Creation of Mythology

"Myth is a type of speech"  Roland Barthes


All nations require a mythology in order to define their nationalism, and raison d'etre.


When you evaluate any sort of content, what is on the surface of a text must not be immediately accepted as the truth or the underlying message of the text.  When you teach a course, you can use various examples of accepted mythologies and ideas and break them apart for students.  However, the problem about doing this is that it tends to decenter them.  Like all contemporary people today, most want to go about their daily life without a mindfulness.  You are unaware of your surroundings, your situation, your life.  A tourist trap often contain significant underlying mythological roots.  Let's use one of the most famous tourist traps in Vietnam as an example which is the Cu Chi Tunnels.  Of course, they even have a website.  Go here.


When you open the website, you must analyze the visuals immediately.  There will be a picture of a young woman holding the iconic AK-47.  Splashed as far as July 2010 is the phrase, "In the Heart of the Vietnamese People and distinguished world wide visitors."  Cu Chi must be in the heart of the people.  This is what that sentence means.  Not exactly the best English, but then Asianglish is so pervasive anyways.


The Cu Chi tunnels were created by the VC in the South.  This is an important thing to bring up.  The North Vietnamese did not create this vast network; it was the South Vietnamese VC who did this.  The problem with this is that the Southern VC were immediately marginalized after the 1975 Unification.  So underlying the tourism exhibit is the fact that they honor them for their efforts during the war, but they were not truly valued after the country was unified.  There were 3 distinct Vietnamese entities during the conflict: the North Vietnamese, the South Vietnamese and the VC.  Let's look at how it was set up by looking at the ending of the tour.  You are basically forced to watch this video.


This text is so rich in discussion points that it would take up the entire day.  It's obviously a very old film with an obvious slant and tone.  The film promotes women fighters (Killer American Winners) and even a child soldier.  To read into this implies that the war was a total commitment of the people, but it also implies that they used child soldiers during the war.  The use of child soldiers during the conflict has been factually acknowledged, in fact, it has been acknowledged by the very informational video presented at the Cu Chi Tunnel attraction. 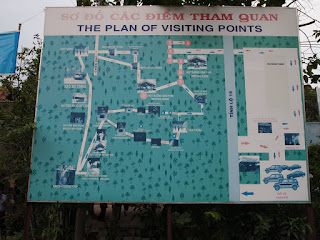 This map shows the extent of the tunnel system. 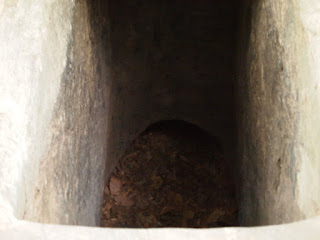 The soil in the Cu Chi area is very dense.  This was why the tunnel network was so effective. 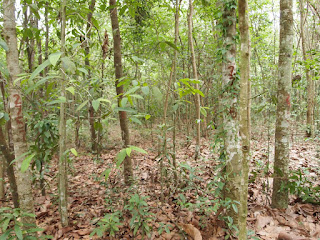 This is the type of environment our GIs faced in the jungles of Vietnam.  Basically, you could be right next to a  VC and not know it. 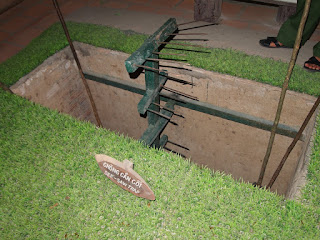 These wonderful things would be waiting for our GIs.  Now, the funny thing is that this is a tourist destination spot.  Tour buses line up to see this. 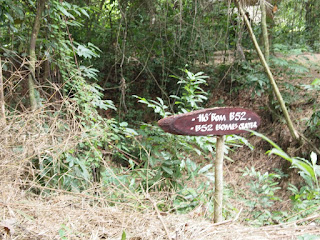 Even bomb craters are given notations.  Ironically, after you do the tour, you have a chance to shoot a rifle.  Essentially for me, I shot an M-16.  Yeah, I know.  Mr M shot a gun?  What the heck.  They offered, so I shot it.  Ironically, the M-16 had many problems during the Vietnam conflict with misfires and jams.  Only after a few modifications did the weapon properly function.  Although it is still used today in the US Military, there is still discussion about both the ammunition and the rifle design.  It was the first of what would be a growing line of hi tech rifles.


Underneath it all, the entire location is a tourist attraction and a way to reinforce the mythology that seems to define Vietnam--victors in the American War as a united country.  This is not the case.  Vietnam was part of a Cold War scenario in which two superpowers ended up playing with people's lives.  Nothing was completely indigenous, but rather couched in the fabric of the conflict between Communist countries and Capitalist countries.  However it is advertised, the Vietnam War was a conflict that left millions dead, and thousands permanently scarred.


"There is no instance of a country having benefited from prolonged warfare."  Sun Tzu, The Art of War.


Posted by Sensei Maruyama at 9:01 PM