Mekong Delta and Vietnamese Education
Can Tho University, Tra Vinh Univesity, Dong Thap Community College
These are the colleges that we have visited in a span of 2 days.  That's a rapid succession of schools and colleges.  Site visits are an interesting mirror because they are basically running orientations that began to closely mirror each other.  Everything is uniform in Vietnam.
The Higher Education system in Vietnam differs greatly from that of the United States.  More importantly, the concept of open access that exists in our country does not exist in Vietnam.  Vietnam has entrance exams for all their colleges and universities.  As a result, their graduation rates are higher than that of the States.  There are good and bad aspects to this concept.

Good.
1.  It makes it easier to create a student population that is well prepared for the school.  Essentially, you test out all the less than capable students.  You do not have to worry about remediation.
2.  You get a cadre of traditional students going through a well thought out program.
3.  You don't necessarily have to create a large infrastructure of support services.

Bad
1.  College is only for those who can pass the test.

Community College
There is a book called Community College Models: Globalization and Higher Education Reform.  Dong Thap Community College is an example of a United States model going global.  Because Can Tho University was founded with a US Land Grant model, it has a diversified curriculum and a general education formula.  They are also very nice. 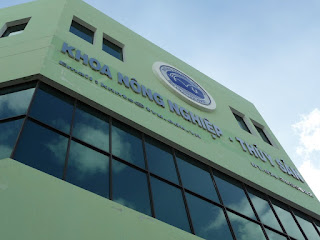 One thing about Vietnamese Universities and Colleges is the Soviet Structure.  Most of the colleges and universities in Vietnam follow this formula of specialization.  Can Tho University does not follow this model, and it is shifting towards a research university formula.  There are institutes focusing on the Mekong Delta and Global Warming.  Yes, even the Communists acknowledge Global Warming.  (Yes, purposely in capital letters as a proper noun.)  For example, they have created DRAGON.  It stands for Delta Research and Global Observation Network.  The Mississippi Delta is also a part of the research study.  In this manner, our two countries are uniquely tied together.  Ironically, we work best with one of the few universities that follow our land grant university formula.  It was obviously the most research heavy institution that we had visited.  Nothing in Ho Chi Minh city was close.
The visits to these higher education institutions tended to be very formulaic.  We would show up.  We would introduce ourselves.  They would introduce themselves.  A presentation about the college would be given.  A Q & A session would soon follow.  Some gifts would get exchanged.  Get on the bus. 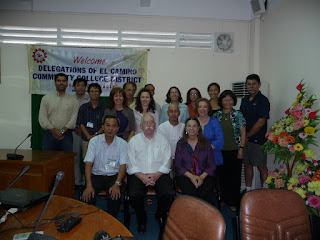 We were always well greeted during this trip.  However, most of the orientations seemed to be the same song with a few lyric changes. The structure of higher education in Vietnam is highly rigid, and this is evident in the presentations provided to us.  If you are a business major, that is pretty much all you do.  All access to higher education requires the passage of an exam.  So when someone deviates from the previous formula, it is rather jolting in a good way.  This is the case for Tra Vinh University. 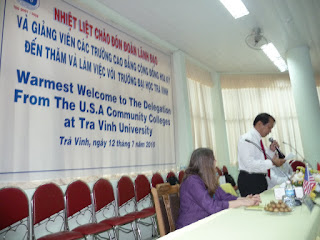 Tra Vinh University had a presentation focusing on their ethnic minority population in the Mekong Delta.  The Mekong constitutes a huge percentage of their economic engine.  You are dealing with populations of Vietnamese, Chinese, Khmer, and Cham.  The university created a very complex presentation in which there was a fashion show, dance, and other presentations. 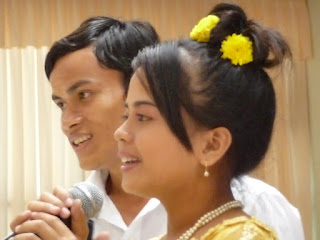 It seems that for all of these performances, they found the most photogenic students they could find. 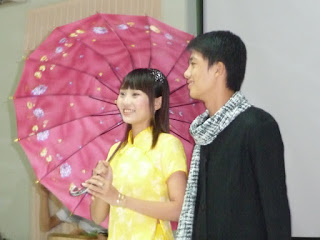 You got Chinese outfits plus an indigenous scarf that people wear. 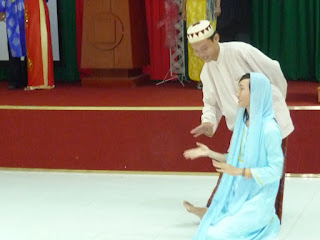 Even with Muslim restrictions, you can still look good. 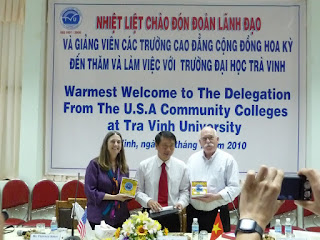 Our leaders were given some gifts, which seemed to be the standard operating procedure with Vietnamese Higher Education visits. 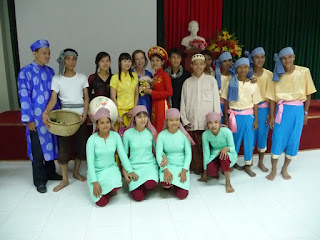 The students put in a lot of time for us, and we felt very honored for their time and effort to impress us. 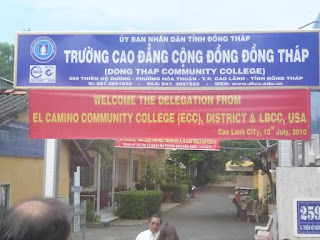 Dong Thap Community College probably most closely mirrors what we are doing at our colleges in the United States.  In terms of population, it is rather small, but it is a new model for the Vietnamese system.  Graduation rates are very high, but it is a closed system.  Whether or not they will open it up is up to speculation.  Ironically, our open access system may be more socialist in mentality than the closed system used in this Communist country. 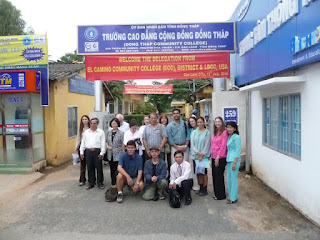 And yes, we were actually there.  Actually, here is a story for you.  When we arrived at the "hotel," I could immediately tell it was not for foreigners. Let's say it was a little moldy for American tastes.  Well the head rector of the college found guest rooms for the team, and he opened up a restaurant just for us.  Great guy. 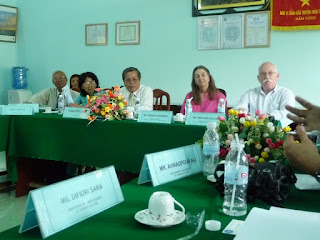 Of course, after we got the introductory discussions and Q & A session, we ended up having lunch with the staff. 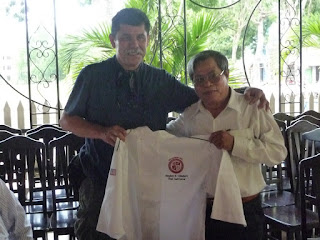 Chef Steve gave him a cooking coat from Long Beach City College.  He was very happy to get something significant from the States.
Posted by Sensei Maruyama at 3:46 PM