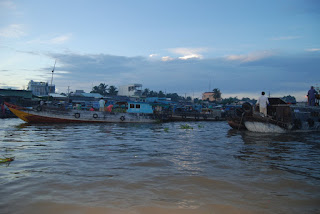 You basically have to wake up early in the morning to see the Mekong economy at work. The problem is that it is now a tourist destination, and I have begun to wonder if tourism is really a good thing. Obviously, tourism is a big income generator for a country.

There has been much discussion about the nature of tourism and how it generates income with an economy.  Vietnam is positioning itself to become a tourist destination.  Although by itself, tourism may not be bad, it does have an impact upon a country.  This is especially true if it is a country that has 3rd World elements of extreme wealth and extreme poverty.  The other major factor is the "orientalist" sensibility of Western tourists.

South East Asia has a problem with sex tourism.  This can be applied to such countries like Thailand, Cambodia, Laos, Vietnam, and the Philippines.  Some go to these countries for the right reason, as in visiting sites like Angkor Wat or Wat Arun or the Reunification Palace.  Others have other reasons.  Ultimately, it comes down to the Miss Saigon syndrome.

The other problem is that it changes the way people operate.  The locals begin to view the tourist as a cash cow.  It changes the dynamics of the relationship.  For every benefit, there is a cost.  The question is how much do you want to pay for something.