Ho Chi Minh Univ of Econ versus US Consulate General

Generally, I put in pictures, but for the University visits in Vietnam, I'm sort of going to avoid it.  It seems that there is a lot of monitoring of speech, and this was sort of made clear at several other visits.  With several sources, we can see that the Vietnamese primarily follow a Soviet Education model.


In order to go to college or a university, you must take a test.  Also, if you do get accepted, most of the colleges and universities are focused on specific topics.  The University of Economics focuses only on items related to business.  There is no general education profile with them.


A discussion at the US Consulate General was somewhat revealing in terms of their idea about the movement of Vietnam.  Vietnam is basically at the same place that China was about 10 years ago.  The bigger difference is that the market economy in Vietnam has moved rapidly.  From 1986, Đổi Mới ended up changing the way Vietnam was doing things.  They shifted from this year from the Soviet model to the market economy model.  Education however did not follow suit.  Education largely followed the Soviet model of specialization and testing for access.


There still appears to be regulation of speech.  One of the problems that has emerged for me is the lack of contemporary novels translated from Vietnamese to English.  So there are some interesting things going on with the country. 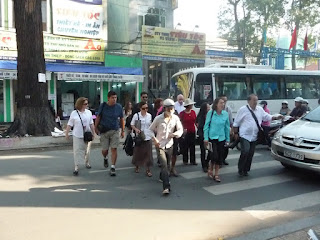 As we walk across the street, and also cross an ocean, we truly do now know we are not in the United States.  Our comrade Ali would say, "Everything is Beautiful!"   On the other hand, beauty is hard to define, as Plato would acknowledge.
Posted by Craftsman Village Historical District at 9:00 PM